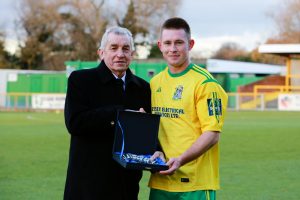 Charlie Stimson was rewarded for taking part in his 200th appearance with a silver salver from chairman Tommy South and then his team mates made sure it was followed with the full quota of points. It was a dream start for Thurrock before Burgess Hill Town got their noses in front – but as the second half progressed Thurrock dominated all the battles for a comfortable win.

There was barely twenty seconds on the clock as Dennis Oli took the ball down the left wing, cut inside across the edge of the area before shooting inside the far upright.

The lead was very nearly short lived when a mishit punch from Jake Jessup is lobbed back in and cleared off the line by Christian Baffour-Akoto. And as Burgess Hill Town press forwards again and again Lewwis Spence and Remi Sutton provide the last line of defence to clear from a corner and minutes after Jordan Clark blocks a crisp cross from the wing.

A couple of chances for Thurrock to extend their lead. Sutton wins the ball and plays it into the area where a defender just beats Spence to the ball. Oli nicks the ball and crosses to the far post but beyond Reece Morgan, Morgan keeps the ball in play and pings it low and hard to deflect off a defender onto the base of the post and out for a corner. A patient build up before Sutton crosses into the six yard box, Morgan gets his body to the ball but Max Huxter is able to snatch.

Burgess Hill equalised with ten minutes of the half remaining. An amazing point blank save from Jessup concedes a corner which gets turned home by James Richmond. And on the stroke of half time Jordan Clark limps off to be replaced by Jeremiah Kamanzi and Burgess Hill take advantage as a throw ends up at the edge of the area where Tony Garrod finds a clever lob to take the lead.

The returning Michael Pindy comes on for James Goode at half time and Lewwis Spence and Reece Morgan drop into the back four.

There is a near repeat of the first half as inside the first minute Charlie Stimson flicks on Joe Christou’s corner for Ronnie Winn but his cushioned header comes to rest on top of the goal. Spence drives out of defence into the opposition half and finds Pindy who wins a corner. Sutton comes close to the equaliser receiving the ball back from Stimson, getting to the bye-line and curling shot beyond the far post.

The pressure finally tells and Thurrock draw level. Oli feeds out to Morgan who in turn finds Stimson. Stimson flicks the ball round the corner to Pindy who drills the ball goalwards, the ball breaks loose and Ronnie Winn powers home. Thurrock don’t ease up, Huxter punches the ball off Stimson’shead but only as far as Sutton who puts it back in the mix. There’s a bit of a scramble before Joe Christou forces the ball home.

Burgess Hill continued to probe to try and get back in the game but Thurrock easily deal with each attempt and their final goal is a textbook counter attack as Ronnie Winn receives the ball just in front of his own area and sprints the length of the field trailing Burgess Hill players. Charlie Stimson and Timothy Ogunrinde have stayed with Winn giving him options to both left and right, Winn chooses Stimson who buries the ball deep in the net to put the result out of doubt.