Thurrock student ready to be part of X factor final

STAFF and students at the National College Creative Industries in Thurrock will be glued to their TV screens this weekend as Rak-Su, Grace Davis and Kevin Davy-White go head to head at the X Factor live shows.

But not just to see who is crowned X Factor champion 2017. Chileleko Osazuwa, a former student at the college, will be taking to the floor at London’s Excel Centre this Saturday and Sunday night.

The 21-year-old from Plaistow, near Stratford, will be an essential part of the award-winning production crew making sure the spotlight shines on the contestants, judges and celebrities in the right place at the right time.

During her one-year Professional Technical and Production course at the National College Creative Industries, Chileleko joined the backstage crew for Emeli Sande’s tour, undertook a seven-week placement at the Royal Opera House as part of the Othello project team and perhaps most importantly for her future career, worked as a camera operator on ITV2’s Celebrity Juice.

Now she is honing her skills working on live shows within the industry, including stints on the live Mercury Prize award show and rehearsal, now followed by her role assisting the X Factor live camera crew.

“Working on the X Factor live shows has been an amazing experience. Each weekend it’s incredibly exciting to hear the live feed in my ear from the director, communicating to all the backstage crew on radio. I work with the lighting technicians, stage crew, director, creatives and floor managers in action, putting all the skills I’ve learned on my course to work on a much bigger scale. Among other tasks I change lenses, adjust the wheeled tripods and make sure the shots of the contestants are taken in the right order.

“It’s been nerve-racking as the new kid on the scene, but the crew have been more than willing to show me the ropes. As they are recognised as the UK’s leading crewing agency for freelance broadcast television, having won BAFTAs for Strictly Come Dancing and Ant and Dec’s Saturday Night Takeaway, it’s really given me confidence in myself and my future career.”

The National College Creative Industries was formed in September 2016 to give young people who are interested in production and technical roles the competitive edge to realise their career aspirations in theatre, music, live events or touring.

Through its network of founding employers, which includes the BBC, Royal Opera House and Live Nation, the college provides practical experience in the creative industries through valuable work placements and state-of-the-art facilities.

Jane Button, Principal of the National College Creative Industries, said:
“We’re thrilled that one of our graduates is involved in such a high-profile show and we’re sure to be watching the skills of the production crew just as much as Sharon, Simon and Nicole’s acts! We hope that Chileleko’s success will be an inspiration to other young people who are curious about careers in the creative industries, either off-stage or backstage. We will be sure to be telling everyone at Saturday’s Open Day to tune in to the final.” 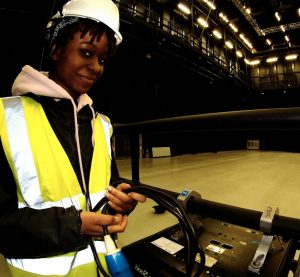