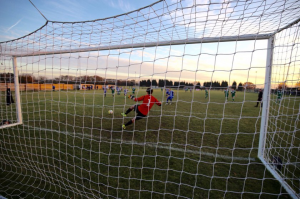 Rovers are out of this seasons FA Vase after two headed second half goals saw their United Counties League opponents progress into the Last 32 of the competition. A goalless first period saw both sides have chances, although the hosts were edging it, however it was a different story second half and it saw the deadlock broken when after Wakering had conceded a soft free kick, this was swung in, and Stephenson sent a towering header over Hawkins. And the visitors sealed victory when a mistake at the back, hesitancy between Hawkins and the defence, saw Dove takes advantage for Cogenhoe to score with a looping header over the keeper. It had been a very disappointing second half from the ESL side, as their FA Vase hopes ended at Burroughs Park, at the hands of the Northamptonshire side.

Jimmy Cox netted two penalties for the hosts as they squeezed through after a frenetic cup tie against fellow Essex Senior League Enfield 1893 and become the league’s sole representatives in the Final 32. The hosts took the league from a Cox penalty midway through the first half after an adjudged handball, and four minutes into the second half Cox netted another penalty, this after another handball that was originally given as a free kick but changed after the referee consulted his assistant who said it was inside the box. Enfield were then awarded their own spot kick with just over twenty minutes remaining and John Bricknell converted this, and the Hullbridge keeper Jamie Merralls, who had come on for the injured Russell Harley, was sent off for kicking out at Josh Sykes, meaning penalty hero Cox had to don the gloves for the final quarter of the game. But Hullbridge then increased their lead when Harry Watkins thumped a terrific free kick beyond Michael Corderoy, only to see Luke Thomas thump home for the visitors almost immediately afterwards to reduce the arrears. However despite late Enfield pressure Hullbridge stood firm to progress into the Fourth Round.

FCR are into second now and only four points behind leaders Redbridge after they gave a young Woodford Town side a footballing lesson, running out 5-0 winners at Theobalds Lane. A Mihai Botosan brace was added to by goals from George Taban, Gabriel Ghinea and Felix Lupu.  Defeat for the Woods leaves them in twelfth spot.

The points were shared at Cricklefield as Ilford and Burnham Ramblers drew 1-1. Karl Swanborough put the visitors ahead, his fifth in three games, in the sixth minute; however the hosts levelled five minutes before half time through James Peagram. And although Ramblers saw Scott Plom sent off late on they managed to pick up a decent away point in this one. Ilford are in eighth whilst Burnham are sixteenth.

Bengal’s recent good form continued after they came from behind to record victory over Hackney Wick at Mile End. The visitors, who saw new boss Tony Ievoli taking charge of his first game, saw Jake Casey put them in front just before the hour mark. But Sporting fought back and levelled through Steven Carvell just six minutes later before a brace from Oscar Mendes in the 81st and 83rd minute saw Imrul Gazi’s side make it eight points in their last four games, taking them into eleventh, whilst Wick drop to second bottom.

Hosts Takeley bounced back from their shock defeat at Waltham Forest last time out to thump Southend Manor at Station Road. Two Carl Mullings goals as well as strikes from Mitchell Das, Nicky Barrett, Jason Todd and Will Green gave the hosts victory which takes them into third spot, whilst Manor remain tenth only on goal difference.

Forest’s revival in recent weeks continued as they thumped Tower Hamlets at Kitchener Road. It was another superb afternoon for Forest, as two goals from Mo Sagaf and one apiece from Joe Creasey and Nikko Stokes helped them to a fourth win in five and lifted them into thirteenth spot, whilst Hamlets remain in seventh.

A late late winner from Tom Macleod gave West Essex all three points at home to Barkingside at Mayesbrook Park. Jerome Martelli had put the visitors ahead five minutes before the break but then saw the home side level just before half time when Michael Mignot marked his return by finding Cameron Gray to level things up. And as time was running out Macleod nodded home a Joe Lefley free kick and saw the hosts remain ninth whilst Side poor form continued as they are now fall into the bottom four.