Best of Queen set for the Thameside Theatre

The Best of Queen, performed by Flash and presented by Sweeney Entertainments, pays homage to one of the most theatrical and dramatic rock bands of all time! 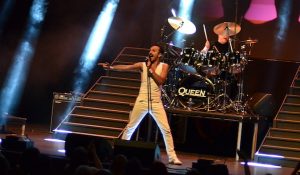 From an early age Claudio has trained and developed a vocal range capable of performing these iconic songs, recreating the magic that made Queen’s live shows so very special.

Claudio is joined on stage by an enormously talented band including Nathan Mathers who brings all the electric guitar virtuosity required to play a very convincing Brian May. The attention to detail is truly impressive and extends to the use of the same equipment used by Queen on stage in their heyday.

For over four decades’ millions of fans have been enjoying the music of Queen. The band released a total of 18 number one albums, 18 number one singles and 10 number one DVDs with estimates of their record sales ranging from 150 million to 300 million records. With a catalogue of timeless hits including Under Pressure, Bohemian Rhapsody and I Want To Break Free, Queen continues to reach out to music lovers of all ages.

Sweeney Entertainments, co-founded by Julie and Peter Sweeney, has been providing a wide repertoire of top quality touring shows for theatre and corporate events for over fifteen years both in the UK and internationally. 2017 was the company’s strongest year to date with more shows touring than ever before and 2018 brings even more new shows and UK tour dates.

Claudio Desideri, lead vocalist for The Best of Queen, said “the show is a hit after hit, anthem after anthem, jukebox of Queen’s Greatest Hits, all performed live with identical instruments and in authentic costumes.”

The Best of Queen show features a selection of the most loved and iconic classics from across Queen’s entire back catalogue creating a live stage show which really catches the essence of this most incredible British band.