BOTH Thames and Romford rugby clubs had no games arranged so came together to play a friendly at Garron Lane and raise some money for Prostate Cancer. 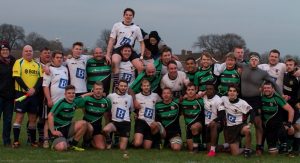 Romford 3s have dedicated their season to raising as much money as they can for the fight against prostate cancer and Thames were happy to get involved.

Both teams only had 14 players so played without full backs. Romford started better of the two sides and after 8 minutes lead 15 nil. Thames failed to deal with an attacking scrum which resulted in Romford’s first try as they used their winger to touch down in the corner. Romford’s second and third tries came from direct fast attacks and scoring out wide.

Although being behind, Thames knew despite Romford’s hard work to go into the lead they not battled hard enough in defence. Spurred on Thames soon found themselves with a try of their own scored by Rhys Dell, after a good strong break by the forwards Dell was given the space to dance through and under the posts. Lee Cairns added the extra two points with ease. Ten minutes later Thames were getting ready to receive the restart kick, after Max Clarke broke free and whilst being hotly perused to the try line he managed to place the ball down behind the Romford try line. Only three points behind Clarke was ready and waiting to put his side into the lead, he again used his pace to out sprint the defence after Jared Gouden (guesting for Thames) gave a timely pass that gave Clarke the space he needed, Cairns added the extra two points. Thames forwards were getting more confident and Luke Edwards powered his way through the resilient Romford defence after his forward team mates recycled the ball several times as they crept closer to the try line.

At half time Thames had come back from 15 nil down to lead 24 -15. A thrilling first half with both teams trading blows, you couldn’t tell that it was a friendly the action and passion was more akin to a top of the table clash.

Thames continued their improved display into the second half and Gouden switched rolls from support act to headliner when he chased Thames’ Matthew Hook on a break, taking a timely pass from Hook to sprint into space and score the try, Cairns added the extra points. Romford were most definitely still in the game and they had the next points on the score board as a great running line left Thames flat footed. Dell had started the Thames revival and he was on hand to give Thames another score after a quickly taken penalty found him darting in and under the desperate defence on the Romford line, Cairns slotted the posts to add the extra two. Clarke has scored several hat tricks so far this season and when he had the opportunity to score one against Romford he didn’t need to be invited twice, from a standing start he took on his opposite number and the foot race was incredibly close but Clarke just edged it.

With 10 minutes to play neither side looked like they were giving up and the crowd were treated to a three try exchange. Romford scored first with a very good phase of play resulting in a try out wide. Thames’ Edgar Juska then replied with a scramble and stretch for the line as Romford tried to weigh him down under several tacklers after a penalty move, with Cairns once again being accurate. Romford had the last say right on the final whistle as they muscled their way to the try and then quickly took a drop goal conversion.

A truly competitive spirited and entertaining game with Thames taking the win 52 -32. Thames awarded their man of the match to Luke Edwards who had not just scored but made try saving tackles, been powerful in his attacks and supportive to his team mates.

Although the score board showed which team had scored the most points the true winner was Romford’s charity raise, as together the two clubs managed to raise £131 for prostate cancer, a massive thank you to Romford for the game, to the players for a display of rugby that was memorable and to everyone that donated to such a worthy charity.