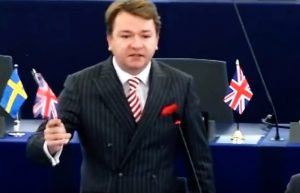 UKIP’s Cllr Tim Aker MEP said: “Today we find out that the European Court of Justice will be governing us for at least 10 years after we leave the EU. The national humiliation continues. Theresa May has bound us to paying the EU’s bloody money.

“When the Government says there is no money to house the homeless, provide mental healthcare for returning service personnel and social care for the elderly, they somehow find £50 billion behind the sofa in Downing Street to hand over to Brussels.

“The Tories will always put party before country and this deal is just about keeping May in Downing Street rather than making Britain great again.

“Theresa May and the Tories never really wanted to leave the EU and now they are letting the EU govern us by stealth for the foreseeable future. This morning Tony Blair would feel really proud of Theresa May.”