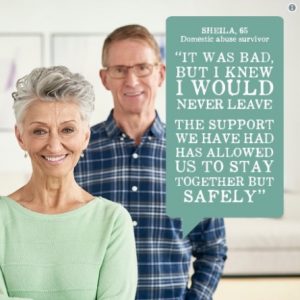 ESSEX Police has faced a backlash over social media posts that appeared to support domestic abuse victims staying with their partners.

Sheila’s Story describes how a woman who “knew that the abuse in her relationship was wrong” is given help and support to stay with her husband.

Essex Police apologised for the offence caused by the post’s use of “clumsy language”.

“However, the stories featured in the campaign are real stories,” a force spokesman said.

“Our message in this campaign isn’t ‘stay in any relationship no matter how abusive’, it’s ‘if something is happening in your relationship even if you’ve been with someone for decades there is help you can get'”.

Social media users reacted angrily to the posts on Facebook and Twitter, with one describing them as “idiotic”.

Essex-based writer and food blogger Jack Monroe said she had “no words for what an irresponsible, silencing, diminishing campaign this is”.

“Basically telling women to ‘put up and shut up’ re domestic abuse. In 2017. This is absurd,” Monroe wrote on Twitter.

Another Twitter user remarked: “There’s no such thing as staying safe in an abusive relationship”.

The force is running the campaign in partnership with Southend, Essex and Thurrock Domestic Abuse Board.

Chair of the board, Dick Madden, said Sheila’s Story had been “thought very carefully about” before being shared as part of the campaign.

“Not all domestic abuse cases are the same, and not all victims will want to leave or consider reporting to the police,” he said.

“Through this particular scenario, we are aiming to reach out to this audience and give them information about the support available, whatever their circumstances.

“We want to make sure victims know where to turn to for support.”

Mr Madden said the campaign had been developed with domestic abuse specialists, refuges, partners and survivors of abuse.

“The message is clear: domestic abuse is never acceptable,” he said.

“Within the comments on this particular post, there were a number of supportive comments – some from survivors who sought support and have stayed within their relationship.

“We think it is positive that the campaign has sparked a debate on a very important issue.”

Commenting on the Essex Police Facebook post, one user – who runs a relationships service in Essex – said that many older victims of domestic abuse wanted support to stay with their partners.

The campaign’s message “recognises the views of many older victims”, she said, and would hopefully encourage them “to come forward without the fear that we are going to swoop in and make them end the relationship”.

“That may happen along the line but at least it will be done more safely than had they tried without support,” she said.

But chief executive of Women’s Aid, Katie Ghose, said the message being promoted was “extremely dangerous”.

“It minimises the devastating impact of coercive control, and could leave women stuck in an abusive relationship and feeling that there is nowhere to turn for help,” she said.