A spokesman for Essex Police said: “Police were contacted just after 2am on Friday December 22 with reports of a man being stabbed in the back with a broken bottle while at the Circus Tavern in Meads Corner, Purfleet.

“The man, aged 22 from Chelmsford, went to the hospital for treatment where he spoke with officers and refused to cooperate with a police investigation.” 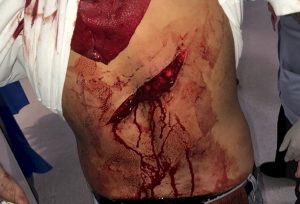