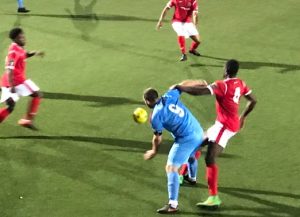 Visiting East Thurrock, who struggled through the first half and were fortunate to go into the break on level terms, were probably most grateful for the stoppage, though they had made an improved start to the second half which lasted just five minutes before referee Lloyd Wood called time when the two of the four pylons went out.

The lights had failed three times during the first half but play was able to continue but with little hope of any certainty that they would stay on if restarted again, the referee had little choice.

The Rocks, who started the afternoon on the fringe of the play-off race has looked uneasy against their hosts who are starting to claw themselves away from the drop zone and they struggled to come to terms with a fluid Concord attack.

Concord always looked likelier to take the lead as East Thurrock threatened little in response and they went close when an angled cross from Khale Da Costa took a deflection that saw it hit barn and post before bouncing away.

However, it wasn’t long before the Beachboys got the opening goal when another cross from Da Costa caused confusion in the Rocks defence on 31 minutes and a combination of defender Lee Burns and Concord captain Steve Cawley ensured the ball went over the line.

By this time the lights had failed a couple of times on one side and restarted but though the game was being played out in gloom, there was still enough light to go on – though clearly there wasn’t enough light for the assistant referee, who made a blunder as he peered across the face of goal after a double strike by Max Cornhill in the 40th minute brought a great double save from Louis Wells. The ball squirmed loose and span viciously but barely touched the goal-line before being hoofed away but to everyone’s surprise, not least Cornhill and the East Thurrock supporters behind the goal who had the closest view the flag went up to indicate a goal.

As it happens the abandonment that was to follow made the issue immaterial as the goal – or non-goal, will be wiped from the records!

Having got to halftime, which was delayed for more work on the lights it looked as if the problem had been solved as the illumination stayed on long enough for the game to restart – but just five minutes into the half the lights went out for the last time.