FRIENDS, family and donors through a JustGiving page have rallied to the aid of a former Corringham man who suffered serious injuries after falling from a three-storey building on the Caribbean island of Sint Maarten.

Kurt Russell, 32, fractured his skull and neck and suffered a bleed on the brain in the fall on Wednesday, 27 December 27 and though he received emergency treatment and was placed in an induced coma by doctors to stabilise his condition, his circumstances were dire as he had no medical insurance on the island, which is split into two halves as dominion territories of Holland and France. The hospital in which he was initially treated declined to provide additional care until funds could be provided.

That prompted his family to borrow nearly £49,000 from friends and finance companies which was transferred to the Caribbean and Mr Russell was airlifted to the Cayman Islands for further surgery yesterday (Saturday, 30 December).

However, more money will be needed and the family have launched a JustGiving page which has already raised more than £5,500.

“He was helping a friend move and he somehow fell off the edge of the balcony,” said Mr Russell’s sister, mum-of-two Tyla, 28, from Welwyn Garden City. “He grabbed the handrail and it came away with him as he fell straight to the floor.

“My mum has borrowed money from everyone. So far we have sent over £49,000 so that he can have the operation. It’s all on credit cards and borrowed from people.”

Although the situation has hit the family hard, they have rallied together to support one another.

Mr Russell who splits his time between Sint Maarten and the UK, initially travelled to the island ten years ago to work on fishing boats taking tourists on trips. Following the devastating impact of Hurricane Irma at the end of the summer, he volunteered as a construction worker helping to rebuild the island.

To contribute to the appeal visit https://www.justgiving.com/crowdfunding/tyla-russell?utm_id=106 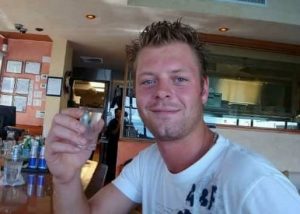