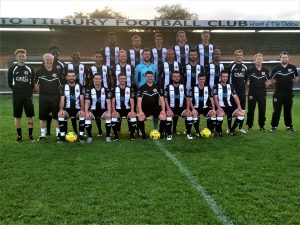 Tilbury’s recent good run came to an end against play off hopefuls Barking on a wet and sticky night at Chadfields. With the game passing a late pitch inspection, both sides started well, despite the slippery conditions. An early cross from Conor Mead after six minutes was cleared, before Abdus Salami saw his header well saved by Olajide. Hughes-Mason then had a good chance in the 10th minute when he saw his curling effort go wide.

Barking opened the scoring on 11 minutes from Billy Jones who chased down a long ball keeper Clarke Bogard tried to clear, but his miss kick saw the sliced ball reaching Billy Jones, leaving him the task scoring in to an empty net.

Barking might well have put the match beyond Dockers as Jones hit just wide, before the game became littered with fouls.

Before the break Kris Newby had two good chances, with a good save and another effort straight at goal. The conditions before the break caused concern for all. During half time the rained ceased and Tilbury came out all guns blazing. On 48 minutes a major talking point came when Adam Vyse raced through with the ball and rounded Emmanuel Olajide, with the goal at his mercy, Olajide’s arm sent Vyse tumbling to the ground on the edge of the area. It was close to being a penalty and the crowd waited to see a red card, but the referee chose a yellow and awarded a free kick on the edge of the box. The resulting free kick came to nothing but the Tilbury pressure continued and on 64 minutes the deserved equaliser came when Ross Gleed laid a pass for Toby Aromolaran to race onto and he finished well.

Tilbury were well on top and five minutes later Adam Vyse hit the bar. Aromolaran then fired over when it seemed easier to score. Against the run of play Barking nicked a second goal when a free kick out on the right from Abs Seymour went straight in.

Seymour compounded Tilbury’s misery three minutes later as he raced through, avoiding the offside flag, to chip past Clarke Bogard.

The game became scrappy late in the game, seeing three yellow cards in a small melee, while the Barking’s Tiob Adeyemi, avoiding no punishment and will fortunate that further action was not taken against him for a movement of his head.

The result sees Tilbury remain in 16th. Tilbury return to action on Saturday when they make a trip to Norfolk to play Dereham Town.