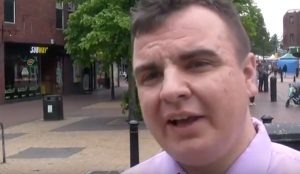 A THURROCK Liberal-Democrat has written to MP Jackie Doyle-Price over the EU Withdrawl Bill.

Responding to news that Liberal Democrat Brexit Spokesperson, Tom Brake, is to move amendments to the EU Withdrawal Bill giving MPs a meaningful vote on the Brexit deal, Liberal Democrat Parliamentary Candidate for Thurrock, Kevin McNamara, has said the following:

He said: “Like Jackie, I called for a Remain vote in the EU referendum in 2016. The Liberal Democrats accept that vote but believe that a journey that begins with a democracy should end with democracy too.

“Unlike the Conservative government, we believe that voters should be to express their opinion on the deal the government reaches, before we leave the EU in March 2019. If the government is confident it has reached a good deal, it has nothing to be afraid of.

“Despite the government blocking these amendments, we are now calling for MPs to be given access to full information and a vote on the deal, rather than letting this deal be signed in a back room of Downing Street. I have written to Jackie today asking her to back this amendment too, so Britain’s sovereign Parliament has the final say.”