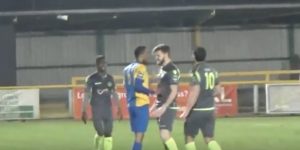 ROMFORD haS suspended midfielder Kai Bichard after an incident against Grays Athletic.

As the film below shows, the 27-year-old clashes with a Grays player in their 1-0 victory in the Essex Senior Cup quarter-final played at Ship Lane, Thurrock.

After the players go up for a header, Bichard appears to make a biting motion to the back of the Grays player’s head.

Bichard was not cautioned at the time, but he was substituted shortly after and the club has now decided to take action.

Manager Paul Martin said: “Kai has been suspended from the club because of an incident, which went on against Grays during the game.

“Obviously the referee didn’t pick it up, but we’ve picked up on it and I think he’s been suspended until further notice, and I’ve still got to address it properly.”