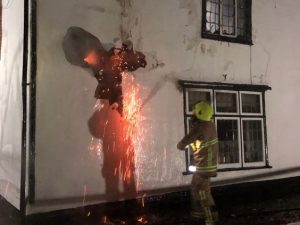 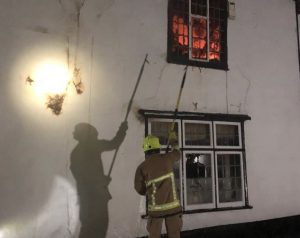 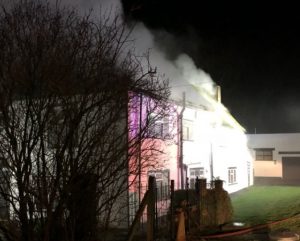 SIX fire engines, an aerial ladder platform and a water bowser were called to a Grade II listed building in Horndon on the Hill in the early hours of this morning (Sunday 21 January).

On arrival firefighters reported that around 20% of the ground floor, first floor and roof were alight and the whole property was heavily smoke logged.

Watch Manager Scott Fretton was one of the first on scene. He said:

“Our main priority was to stop the fire spreading so that the Grade II listed building could be salvaged.

“Crews worked extremely quickly to set up water supplies and begin tackling the fire from both inside and outside and restrict the spreading.

“Once the fire was out our crews worked to pinpoint hotspots within the walls and ceiling to ensure the scene was safe, and by 6.40am we were sure that the fire had been completely extinguished.

“The house has suffered around 30% fire damage as well as smoke and water damage.

“Unfortunately two dogs were in the property at the time of the fire and sadly died during the incident.”

An investigation will take place to determine the cause of the fire.