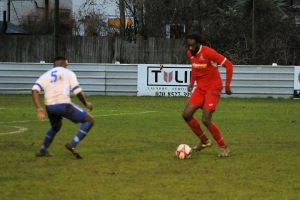 A Roddy Lemba hat-trick helped Barkingside to all three points at Mile End against Tower Hamlets, getting their weekend off to a flyer in the process. The visitors took the lead when Lemba converted from the spot, and then same man was on hand to loft over James Pellin just before half time to double the lead. Hamlets pulled a goal back through an own goal to give them hope of a comeback, however Lemba then completed his treble to end all hopes of that, and give Side another three points as their 2018 continued to impress and more importantly takes them three clear of the bottom four. For Hamlets it’s a no win in three now and they drop to 8th.

Steve Sardinha netted twice as the Tons defeated struggling Lodge at The Old Spotted Dog to remain 6th in the division. Sardinha slotted home to give the hosts the lead before Lodge hit the woodwork and then saw Sardinha net a penalty to double Clapton’s lead. Lodge did then pull a goal back via Brian Simpson, however The Tons netted again in the final minute through Kai Bichard to seal the win. Defeat for Lodge sees them slip further into the bottom four.

Nathan Dewberry hit four and Neil Richmond grabbed a brace as Rovers destroyed Burnham Ramblers at Burroughs Park. Bryan grabbed the other goal for the rampant hosts who could have easily scored more, but the win sees the hosts up to fourth place, nine points behind the leaders, whilst Burnham, who have now conceded 24 in their four games since the new year, slip to 14th and remain six points above the bottom four.

The big bottom four clash at Lower Road ended all square as Hullbridge and Enfield shared a draw. The visitors took a 17th minute lead through Ben Bradbury and then clipped the bar ten minutes later as they looked to take control of this important contest. However eight minutes into the second period Sports levelled when great work from Adebola Sotoyinbo ended with his cross being tapped home at the far post by Michael Edgar. Neither side could force a winner though and it meant both picked up a point but do remain in the bottom four.

Jonas Fuadianitu fired Hackney Wick into the lead at Cricklefield. But goals from Liam Whipps and Jamie Hart saw the Foxes turn the half time deficit into a 2-1 win against the bottom side. It was a scrappy win for the hosts but it’s all about the points and those three points took them into 7th place, whilst Wick are now eight points from getting out of the bottom four places with only thirteen games to go; things need to turn around dramatically for the Old Spotted Dog side soon.

The match at Southchurch Park was postponed due to a waterlogged pitch.

It’s ten points from twelve for the Airportmen now this year after they put in a brilliant second half performance to see of Sporting Bengal United at Hargrave Park. After a goalless first period the hosts took the lead ten minutes into the second half when Julian Lloyd rose highest to glance home a header in off the post, and with twenty minutes left they doubled their lead when Sporting keeper Benovskyy pushed a corner onto the bar and the ball went to the back post where Chris Moore volleyed home. Two minutes afterwards Warren Thomas netted with his first touch after coming on as a substitute for the hosts and with five minutes left Ryan Ramsey completed the scoring for Stansted as they continued their amazing turnaround since the New Year, and they climb to 13th as a result. Sporting, who saw Teo Borozon sent off late on, slip to 15th in the table and are five points above the bottom four.

Match postponed due to a waterlogged pitch at Station Road.

The Motormen opened up a six point lead at the top after victory at Kitchener Road against Waltham Forest. After a goalless opening forty-five minutes the visitors took the lead when Brian Moses rounded keeper French to slot home, but the hosts levelled when Redbridge keeper Greene spilled an effort from Modeste and saw Njai smash home the rebound. Reside Coxi-Sebastfao then restored the visitors lead before Moses headed home unmarked to increase the Motormen’s lead. And with the final kick off the contest Jacob Dingli added another to made it twelve straight wins for the Oakside outfit. It’s two straight defeats for Forest now as they slip to just a place above the bottom four, two points clear of it.