FOUR OF the members of the newly formed Thurrock Independent Group appear to still be working for a Ukip MEP.

On Friday, the 17 Thurrock UKIP councillors announced that they had left UKIP and formed the new poltical group.

Aveley and Uplands councillor, Tim Aker, made it clear that he would remain a UKIP MEP.

Recently, disaffected UKIP MEPs have remained in the European Parliament but changed their title to Independent.

But a search of the European Parliament website shows that four of the Thurrock Independent councillors appear to still be working as Tim Aker’s “local assistants”.

When we spoke to councillor, Luke Spillman. He explained that he was an employee of the European Parliament.

To be clear, there is nothing wrong with this but it may not help them establish what is called “clear blue water” between UKIP and the Thurrock Independent Group.

However that is the call of the Thurrock electorate. 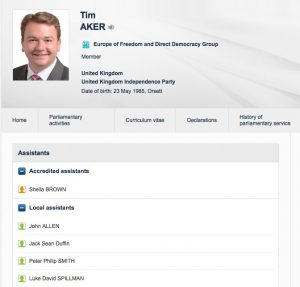