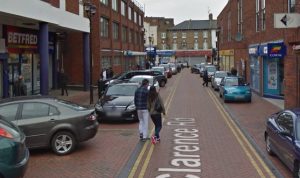 THE WAVE of violent incidents in Grays has continued with reports of a large fight on Clarence Road in the town centre.

An Essex Police spokesperson said: “We were called to reports of a group of men fighting in Clarence Road, Grays at around 2.30pm on Tuesday, January 23rd.

We attended and carried out a search of the area.

A 24 year-old man was arrested on suspicion of possession of an offensive weapon.

He was later released without charge.

11 Responses to "Another large fight in Grays Town Centre"