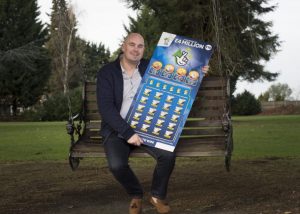 A CARPENTER from South Ockendon is celebrating the perfect start to the year with a £100,000 win on a National Lottery scratchcard.

Father of one, James Elsey, 33, bought his winning scratchcard on his way to work in central London.

After scratching it at work and finding he had won the huge prize, he continued to work the most urgent jobs, before eventually letting his boss know and asking for the rest of the day off.

He said: “It’s not every day you win £100,000 and my mind wasn’t on the job so I thought it might be safer for me to call it a day. On the way home I rang my partner, Mel, who thought I was joking and only believed it when I sent her a picture of the winning scratchcard. Thankfully Camelot were a lot more believing when I called, and they confirmed the win immediately!”

For James and Mel, and their two-year old, the win couldn’t have come at a better time. James added: “In some ways, the win isn’t about the money but about the security it gives us. I am self-employed so if I’m not working, I’m not earning and that has meant that holidays and days off sick always come with a little bit of worry. This win affords us much greater financial freedom and therefore, more security.

While using his win to give his young family financial security is top of James’ list, there are a few treats along the way. He said:

“I’m not sure if you’d call it a treat but I’ve been wanting to lease a new work truck for ages. Every time I was about to sign on the dotted line I worried about being committed to the monthly payments in case my work dried up. Now I can head into the Ford garage and that truck is mine!”
Advertisement