AFTER last week’s superb home victory against the League leaders, Cheltenham, the T-Birds were not quite on the top of their game for this visit to Oxfordshire. 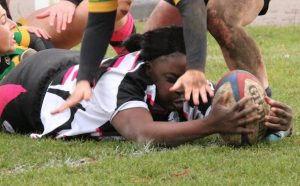 Even though the T-Birds got their noses ahead early on and were never behind, this game was in doubt for at least 60 minutes.

Henley were well organised, tackled hard and did very little wrong, but eventually succumbed to the raw pace and power of the T-Birds.

Once again, the T-Bird pack were on good form, demolishing Henley in every scrum. but the bitterly cold conditions did nothing for the handling skills of either team, with too many kock-ons and dropped balls.

Fortunately, just about every scrum from a knock on resulted in T-Bird possession.

Dyche grabbed an early score to settle the nerves, but even after only 20 minutes, Henley were already doubting their ability to breach the thin Black and White Thurrock defensive line and kicked a penalty to keep the game poised at 3-5.

Henley now had their best spell and put Thurrock under relentless pressure for the best part of 20 minutes but Ts held out. Even when Hepper was given a 10 minute rest, Henley just could not get over the line. 3-10 at half time, with time left on the card for the restart.

Henley started the second half as they finished the first, but again Ts held them out and once Hepper was restored, T’s slowly tightened their grip, but again cold hands and dropped balls costing chances.

Finally after 70 minutes with Ts pressing the line, Dyche claimed her second close to the posts for Cook to convert.

Now with the game won and less than 10 minutes to play, Ts set off looking like a different team.

Collecting the kick off in their own half, Ts ran hard and straight, Foy, Pugh and Nichols making good ground into the Henley 22. Going right and back left, finally the passes stuck and less than 2 minutes from the kick off, Queenie (Longdon-Hughes) smashed through the defence to touch down wide on the left.

With time rapidly approaching, the bonus point was now a reality and Ts gave it everything.

2 penalties took them into the Henley 22 and once again going wide the passes stuck and Tylers offload out of the tackle gave Smith a run in for the corner and the oh so vital bonus point.

Second in Championship South, 3 points behind Cheltenham, the game in hand is played next Sunday against Bath to hopefully put Thurrock back on top.