Third day of strikes at site near Stanford-le-Hope 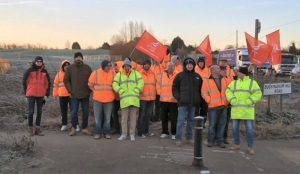 A THIRD day of strikes is taking place today (Thursday) near Stanford-le-Hope.

A spokesperson for Unite the Union said: “The Stanford Le Hope based company is intent on introducing inferior terms and conditions for new starters. This will create a two tier workforce as new starters will receive less pay than colleagues.

“Unite and Tarmac which produces concrete breeze blocks, attended talks organised by the conciliation service Acas before Christmas that stretched into the New Year.
“However no progress was made.

“Unite which represents 100 per cent of the workforce, had already held a ballot for strike action, which produced a huge yes vote. As the talks were making no progress Unite served notice for strike action.

“There will be a series of 24 hour strikes with the first scheduled for Tuesday 30 January, with further strikes on 6, 8, 20, 22 February and then on 20 and 22 March.
Unite Regional Officer Guy Langston said: “Unite’s members have made it totally clear they will simply not accept their terms and conditions being eroded.

“Tarmac’s plan to cut pay for new starters is the thin edge of the wedge. Our members believe that if this is unchallenged it will lead to further attacks on terms and conditions.

“Our members are only taking strike action as a last resort as a result of the company’s refusal to negotiate. Strike action will create serious disruption to Tarmac’s business but managers has brought this on themselves.”