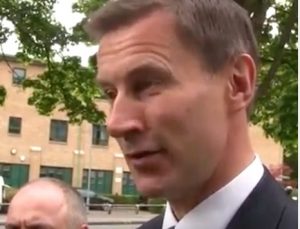 THE PROSPECTIVE parliamentary candidate for Thurrock, cllr John Kent (Lab) has poured scorn on a recent visit by Secretary of State for Health, Jeremy Hunt to Tilbury.

Thurrock MP Jackie Doyle-Price brought Mr Hunt to Tilbury where, it appears, they discussed plans for a new health hub and then visited a local Indian restaurant.

John Kent said: “Two of the most important people as far as the NHS is concerned visit Thurrock and yet fail to mention Orsett Hospital and are obviously afraid of talking to local people.

“There are plenty of health issues in Thurrock, not least the very real lack of GPs, but there is currently one over-arching topic that needs publicity; the proposed closure of Orsett Hospital.

“Had Mr Hunt or Ms Doyle-Price taken time away from their luncheon date and spoken with local people, I have no doubt the Orsett Hospital’s future would have been the main subject of conversation.

“But they didn’t. Were they afraid of the reaction they would have received, or were they simply on a publicity junket, a photo-op for JDP showing her boss was supporting her.

“Visit any NHS building and mention the words ‘Jeremy Hunt’ and you will be in no doubt about the distain with which he is regarded. I would suggest to Jackie she would be better steering clear of Mr Hunt and actually talking with local people to find out what their concerns are.”

For the record: It appears only one newspaper was invited to event and granted an “exclusive” interview.