Report reveals Thurrock Council is responsible for destroying the most abandoned cars of any council in Britain. 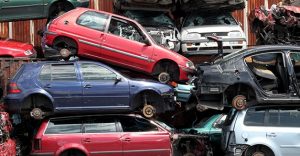 A REPORT by Confused.Com has revealed that Thurrock Council is responsible for destroying the most abandoned cars of any council in Britain.

A new interactive map reveals councils in the East of England removed almost 6,000 vehicles in 2016 and 2017, on the back of 32,751 reports of stranded cars from the public.

A Freedom of Information (FOI) request was sent to Thurrock Council in November.

In answer to Questions 1-3 please see below figures for the number of reported Abandoned Vehicles that we have been able to access:

With regards to Questions 4 & 5, unfortunately we do not separate these in the budget monitoring, the data is therefore not obtainable.

Councils in the region forked out almost £50,000 to remove or destroy abandoned vehicles, and issued £22,000 in fines.

The research, obtained through Freedom of Information requests to 39 councils across the East of England, reveals the number of abandoned vehicles removed in the region increased eleven-fold in four years. This is equivalent to a 1,087% rise (281, 2012 vs 3,336, 2016).

To visualise the extent of the epidemic, Confused.com has created an interactive scrapyard map, which reveals 5,653 vehicles were removed in the East of England in 2016 and 2017. This is following 32,751 reports of abandoned cars in the region from the public across the two-year period.

And these nuisance vehicles have created a very expensive problem for local authorities in the East of England alone. In fact, councils had to fork out £49,844 of tax-payers money to remove or destroy unwanted and unclaimed cars in 2016 and 2017, and received less than half (44% – £21,690) in return in fines issued to the culprits. But not all of the removed vehicles went back to their owners. In fact, Thurrock Council destroyed 2,299 vehicles over the two years alone – the most of any council in the UK.

While its clear local councils are on top of removing abandoned vehicles from roads, no doubt drivers want to do their bit to help rid the region of the epidemic. Confused.com has created a new ‘Report an abandoned car’ tool, which enables users to search for their local council and give them all the information needed to take action. No doubt this will come handy for the two thirds (65%) of motorists in the East of England who find abandoned vehicles a nuisance. A further three in five (60%) find them an eye-sore, saying they make the streets look run down. But this is unsurprising, seeing as almost a third (29%) of drivers in the region have seen an abandoned vehicles in their street or residential area. A further three in ten (31%) have also witnessed a stranded car on the side of a B road. Yet only one in ten (11%) have reported an abandoned vehicle to their local council.

The research suggests the issue is widespread across the UK, not just the East of England, with one car removed every thirty minutes, on average. In total, 261,724 reports were made to UK councils in 2016 and 2017, of which 31,812 were removed and 20,551 destroyed. Confused.com’s interactive map not only identifies the most prolific regions for drivers ditching their cars, but allows users to see how the problem has worsened in their area. In fact, the number of cars being abandoned across the UK has increased by a whopping 577% in four years (2012-2016).

Unfortunately, the issue of drivers ditching their cars is widespread among motorists in the region with one in seven (15%) admitting they have abandoned their vehicle at some point. However, most of these drivers (89%) only did so temporarily. A further one in seven (15%) admit they would also consider leaving their vehicle behind in instances such as they couldn’t afford to get it repaired for towed (22%), or afford to maintain it (20%).

To try and address the problem of abandoned vehicles clogging up Britain’s roads and car parks, garages and manufacturers have put in place scrappage schemes to help relieve drivers of their old or unwanted cars sustainably. But, only one in six (16%) motorists in the East of England have used one of these schemes. Drivers using these schemes can be entitled to cashback if their vehicles meets a certain criteria, which is both easier and potentially more financially rewarding than selling a car privately. And with the rising costs of car insurance, fuel and servicing and repair costs, a bit of extra cash could certainly come in handy.

Amanda Stretton, motoring editor at Confused.com, says: “The rising cost of fuel, car insurance and tax is overwhelming some motorists, causing some of them to ditch their vehicles. Our interactive map shows just how much of an issue this has become across the East of England, as councils spend thousands of pounds every year removing unwanted cars from the roadside.

“Abandoned vehicles are an eye-sore and a nuisance. Drivers who suspect a car has been dumped in their area should use Confused.com’s search tool to contact their local council, who will get in touch with the owner, or remove it.”

“Sadly, one of the reasons so many drivers are abandoning their vehicles is due to the rising cost of owning a car, especially car insurance which is now £827(3) on average. To save money motorists should shop around online using Confused.com.”

We spoke to Thurrock Council. A spokesperson said: “Thurrock Council’s response to an abandoned vehicles Freedom of Information (FOI) request was included in an insurance comparison website press release.

It may have been unclear which has led to some confusion about the number of abandoned vehicles in Thurrock.

Here is the correct data for removed and destroyed vehicles in our borough.

The remaining 2,069 reports of abandoned vehicles were not actually abandoned because reports may have been duplicated and have been addressed by other means.

2 Responses to "Report reveals Thurrock Council is responsible for destroying the most abandoned cars of any council in Britain."