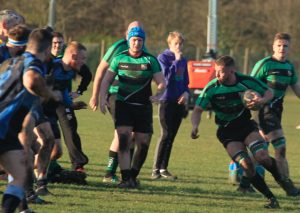 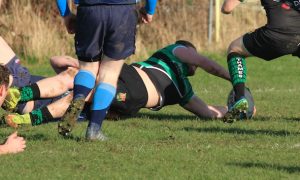 THE first half saw Thames dominate their hosts, in every area of the pitch. Despite Thames dominance it was Manor who scored first from a penalty kick. Thames answered back with two outstanding tries; the first came from the restart after the Manor penalty. Lee Cairns restart kick was stroked to perfection, Liam Smith ran onto the ball before any Manor player could react. Smith then powered forward and off loaded to unlease the backs. Kyle Munro just back from injury finished the move with a quick two steps and dive over the try line. Thames next try was just quality to watch. From a strong Thames scrum Smith broke away again setting the backs free this time Manors defence was in place but Thames support player was no match and as pass went to pass, it was Smith on hand to finish off the move and scored under the posts. Cairns added the two extra points.

The second half saw Manor make a large number of changes to their side to counter act Thames and this worked for them. Thames were also on the wrong end of a high penalty count which in best they could feel hard done by, but once given it’s given so you have to play the conditions and what’s in front of you which Thames didn’t.

There was one bright spark in Thames’ second half when Max Clarke using his pace out stripped the Manor back line and finished off his run with a quality chip, catching his own chase to run over the try line to score.

Understandably Thames was disappointed with their second half performance but on reflect over the two games each side won their own home game by the same margin. The final score 46 Manor 17 Thames.

Thames man of the match was awarded to Luke Edwards he was outstanding in every area of his game leading from the front putting his body on the line for his team.