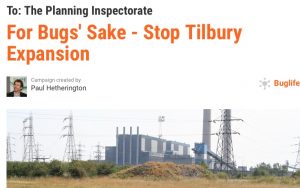 AS Buglife’s petition to stop the Tilbury expansion approaches 75,000 signatures, Natural England has submitted a very strong condemnation of the impact of losing the valuable wildlife site around the Tilbury Power Station.

Natural England’s response states “In our opinion, the overall assemblage could be considered to be of sufficient quality to meet the designation requirements of a Site of Special Scientific Interest (SSSI).” They further add that “The Lytag LoWS (Local Wildlife Site) in particular is regarded as almost unique in England and, whilst as a brownfield habitat it is man-made, would be very difficult to re-create with confidence on a compensation site should it be lost to development”.

Jamie Robins, Buglife’s planning spokesperson commented. “The strength of the statements from Natural England reinforces Buglife’s view that this site is too important to allow the rare habitats to disappear under container storage and rail tracks. Losing the irreplaceable wildlife community at Tilbury Power Station would put the Thames Estuary’s already threatened invertebrates under even greater pressure.”

One Response to "Buglife petition against Tilbury expansion tops 75,000"