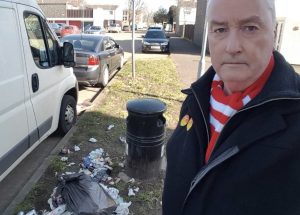 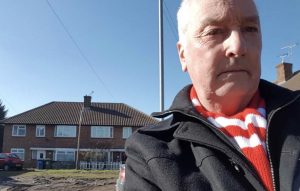 THURROCK Labour’s candidate for the Ockendon by-election, Leslie Strange, has strongly criticised Thurrock’s Tory run Council for their claims that they have kept Thurrock clean.

Leading Thurrock Conservatives have recently taken to social media to claim that our borough is clean and tidy under their watch. But lifelong Ockendon resident, Leslie Strange, has rejected the Tories claims as ‘fake news’.

Speaking about the reality in Ockendon, Les said: “This misplaced triumphalism from the Thurrock Tories is pretty repulsive. Whilst the Tories have been publicly crowing about the self-proclaimed success of their ‘clean it, cut it, fill it’ programme parts of Ockendon have been left in a frankly disgraceful state.”

“I have lived in Ockendon all of my life and I love this community but the reality is that in recent years we have been completely neglected by the Tory council.”

“Perhaps if the Tories spent less time trying to close Orsett Hospital and more time actually in Ockendon they would know that our parks have been left covered in litter, our alleyways full of fly-tipping, and our verges allowed to turn into muddy quagmires. What we need is action not empty words.”

“Ockendon deserves better than out-of-touch tweets by Tory councillors. A Labour Council would invest in rapid response teams to quickly deal with fly-tipping and clean Ockendon up.”

“If Ockendon residents believe that their Council owes them better than the Tories shabby treatment then I ask them to lend me their vote on 22 March so that I can stand up for our community and start getting local issues properly dealt with.”