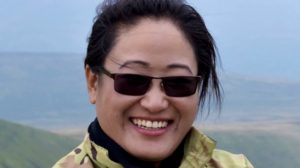 JHUMA Limbu is a brilliant Nepali singer and researcher. Over the last decade Jhuma has trained in classical and western musical traditions and is passionate about researching the folk music of Nepal, in particular the Limbu Tribes from far- eastern regions. Her work aims to preserve and transfer knowledge of Nepali folk music and human civilization to the new generation.

She will be releasing her Album ‘Mundhum ’ which contains solo and ensemble performances and a booklet featuring Limbu songs. The musical encapsulates the essential component of the Limbu Mundhum, a story of genesis and other chants. The album is the result of this young singer and musician’s personal research on the singing tradition of the Limbu Vedic chants and on the repartee between boys and girls which form an important part of the Limbu musical culture.

Namlo is the only London-based Nepali band, committed to raise the profile of Nepali music in a global context. It is a unique collaboration of musicians from around the world , coming together to make Nepali music accessible in a contemporary way by fusing indigenous folk traditions with global influences. our music is blend of melodies and rhythms which inspired by diverse folk tradtional ,culture and land scape of Nepal.

For more details go to https://www.thurrock.gov.uk/events/anglo-asiatic-arts-heritage-alliance-aaaha-sounds-of-world-presents-jhuma-limbu-album-launch