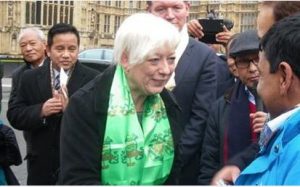 Thurrock MP and Health minister Jackie Doyle-Price told MPs: ‘There is a lot more that we can do to actually really address the concerns about caffeine and I know that’s very high on (the department’s) to-do list.’

Blaenau Gwent MP Labour’s Nick Smith raised the issue during Commons Health and Social Care questions. He asked: ‘Energy drinks packed with caffeine have been connected to problems with children’s health. Now Tesco, Asda and Aldi have banned the sale of these drinks to under 16s, so will the Government do the same?’

Ms Jackie Doyle-Price replied: ‘I think we’re becoming increasingly conscious of drinks with additional unnatural stimulants and their impact on people’s health generally, but obviously that becomes more acute when it comes to children’s health.

‘So we will look more closely at this, but I’m glad he’s highlighted the initiatives taken by individual retailers, because it’s up them to actually implement good practice.’ T