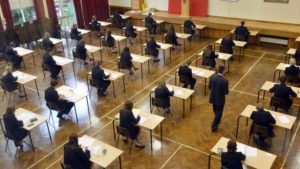 FUNDING cuts have forced up class sizes in secondary schools across England, according to leading education unions, as schools balance their budgets by cutting staff reports The Guardian.

Using official figures published by the Department for Education, the coalition of unions found that 62% of state secondary schools had larger classes last year than two years before.

“We have repeatedly warned that schools have had to increase class sizes because of funding pressures and here is more evidence that this is the case,” said Geoff Barton, general secretary of the Association of School and College Leaders, one of the unions involved.

“It is the last thing schools want to do but they have no other choice because they have to reduce staffing numbers and that inevitably affects the teacher-to-pupil ratio.”

Among the worst affected were schools in York, where the average class size rose by nearly three students per class throughout the local authority, rising from 18 pupils in 2015-16, to more than 21 last year.

Figures collected by the unions’ School Cuts campaign show that although the number of pupils in more than 2,700 schools was little changed, the income received for each pupil fell in real terms from £5,396 to £5,173 in the space of three years because of inflation, rising wages, taxes and pension contributions.

Schools that already had the largest class sizes – in Barnsley, Thurrock, Newham and Leicester – saw further increases, with Barnsley packing more than 24 pupils in its classrooms, and Thurrock more than 23.

“As class sizes increase and targeted professional support by teaching assistants and other support staff is cut, once again it is the pupils who lose out,” said the GMB’s Karen Leonard.

“If we don’t stop these cuts, we run the risk of lessons reverting to a Victorian ‘one size fits all’ model where any child with additional needs, gifts or talents, or just needing a bit of extra support, simply won’t get it.”

Just 21 out of 150 local authorities saw a fall in class sizes. The largest reduction was in Salford, where average classes fell to 20.5 pupils.

One Response to "Funding cuts forcing up class sizes in Thurrock"