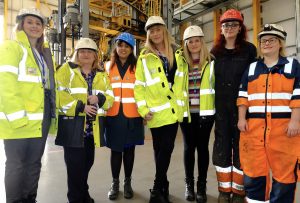 The Shipping Minister got behind DP World’s women’s empowerment campaign, which will see the global trade enabler work with leading organisations and local communities to support and empower women in their right to education and welfare.

The campaign features four pillars which will encourage mentoring, celebrate the success of female staff, aim strategic community investment at supporting empowerment of women and girls and ensure the voices of women in the organisation are heard.

DP World in the UK currently employs 130 women across its operations at London Gateway and Southampton, 12% of the total workforce, in an industry traditionally dominated by men. The company presents equal opportunities for training and internal roles to both men and women.

Nusrat Ghani MP, Parliamentary Under Secretary for Transport, said: “On International Women’s Day it is excellent to see DP World embracing such an important initiative and prioritising the empowerment of women in the shipping and logistics sector.

“Having seen the operation first hand today and spoken with women that work at DP World London Gateway, it is clear that they have an extremely important part to play – not just in ensuring the day-to-day running of this impressive logistics facility, but in the smooth and effective processing of cargo in, out and around the UK.

“Last month I attended the inaugural meeting of the Women in Maritime Taskforce which will be vital in helping us get a better understanding of equality and inclusion within the sector. I hope to see many more women taking up the many exciting opportunities in maritime.”

The Women in Maritime Taskforce was set up in September 2017 and aims to increase the number of women in maritime and in senior roles across its industries. Leaders from across the maritime sector will work to understand issues affecting women in the industry including recruitment, pay, progression and retention.
Chris Lewis, CEO, DP World UK, said: “We’re grateful to receive the backing of Nusrat Ghani for our women’s empowerment campaign.

“We’re proud that women make up such a significant proportion of our UK workforce and are thankful for the invaluable contribution they make to running our facilities in the UK. The ports industry is changing as new technologies are introduced; meaning a sector traditionally dominated by male staff is now becoming more accessible to women.

“London Gateway is the UK’s most sophisticated port. We were proud to employ and train the first female quay crane driver and now have the first ever female union representative in the ports industry. Like many organisations, we have much to do to ensure women are even more empowered. But this campaign will see us work together with local communities, colleagues and organisations to raise awareness of the issues and ensure women have the very best access to education, opportunities and welfare.”