EXPECTATIONS have built during the season as Thames have gone from strength to strength, so it was never on the players’ minds that once getting into the final of the John Adler Cup that they wouldn’t perform to their best. The club sponsors made it possible to take the squad and supporters to the game by bus and the atmosphere on the way up was amazing. Having to select just 22 players in the match day squad, the coaches had their work cut out as so many players had staked their claim to be in the finals team. Just to show how strong the bond has become amongst the players, although not selected Billy Gibbs, Conal Maquire, Danny Jackson, Morgan Podmore and Ryan Looker all made themselves available to help the 22 warm up and prepare for the kick off. 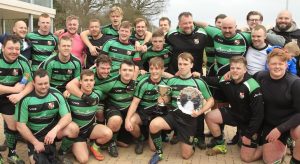 The changing room atmosphere was electric there was no need to focus the players on the task at hand they were ready for what was ahead. Thames kicked off and immediately won a line out; from the throw they played a training field move and drove on a few more metres. As play progressed Thames was awarded a scrum and from the set piece they broke out wide and Max Clarke finished off the move with an early score after 4 minutes of play.

After the first try both sides tested each other out and both held firm on their defence. As the first half progressed Thames was getting the upper hand and the Thames pack was pushing Old Brentwoods back. In attack Thames was varying their play, a chip over the defence and a good chase saw Old Brentwoods carry the ball back over their own try line and conceding a try 5 metres out. Sean Loughran had the weight and power of his pack behind him striking first he won the ball against the head. Mark O’Connell at 8 picked up at the base of the scrum, using his strength and speed he bundled the Old Brentwoods defender back to score. Rhys Dell took the conversion to add the extra two points.

Thames continued to ask questions of the Old Brentwoods’ defence and found themselves a few minutes later with another scrum just short of the try line. O’Connell went again but this time was stopped short, Scrum half Matthew Hook snatched up the ball and attempted to go for the line only to be repelled, Liam Smith took the ball from Hook and dived low and hard over the line. Just before half time Thames scored again, the backs used their quick hands to set Clarke on his way. This time Clarke had three quarters of the pitch to run but his speed and agile step kept him clear of any Old Brentwoods players and he touched down to give Thames a lead of 22 – 0 at half time.

At the start of the second half Thames had trouble getting any continuous phases going but as they preserved Old Brentwoods left themselves open down Clarke’s wing. Clarke again showed his pace almost covering the full length of the pitch. Clarke’s try showed the Thames backs the way forward, coming off the forwards strong play the back line ran several text book moves creating space and time. Firstly Kyle Munro was put on the attack, ball in hand he still had plenty to do, using his strength to drive through two tackles and drop over the try line. The second try again came from the back line running again using their understanding; Daniel Proctor held his defender up and delivered the perfect timed pass onto Clarke who had come in off the opposite wing to run in under the posts. Lee Cairns taking over the kicking added the extra two points.

With the final minutes up and Thames with ball in hand there was no thought of just run the ball out and start the celebrations. Three strong runs into the Old Brentwoods’ forwards put them on the back foot; it was Edgar Juska who finished off the move with a final try. Breaking through the final tackle Juska sprinted towards the line, a brave attempt by the Old Brentwood’s scrum half tried three times to bring down Juska despite the game lost, this typified the Old Brentwoods’ attitude to the game.

Thames won the cup final 44 – 0 but full credit and thanks must go to Old Brentwoods for making it a very entertaining game. Thames awarded their man of the match to Edgar Juska he never stopped for the whole 80 minutes and showed good skill and discipline. Thames enjoyed a strong supporting crowd who travelled to Harlow a massive thank you to everyone that came along.