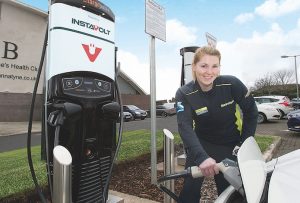 MEMBERS at Bannatyne Health Clubs will soon be able to charge their electric cars in less time than it takes to do a spin class.

Duncan Bannatyne’s health club empire is working with charging company InstaVolt to install rapid DC chargers at its sites across the UK.

InstaVolt’s rapid DC charging stations charge at a rate of 50kW, meaning most electric cars could be fully charged in less time than it takes to do a typical spin class.

The installation of more than 70 rapid DC chargers is underway, with 56 already live, and the Bannatyne Group says more are likely to follow as EV sales continue to grow.

Figures published by the Society of Motor Manufacturers and Traders (SMMT) each month show that electric car sales in the UK have risen dramatically over the past few years. While only around 500 electric cars were registered per month during the first half of 2014, this has now risen to an average of almost 4,000 per month during 2017.*

Bannatyne Group CEO Justin Musgrove said: “Our health clubs offer members the latest in fitness technology and keep ahead of all the latest trends, while aiming to maintain our environmental credentials.

“Enabling members to charge their electric vehicles while using the health club is part of this commitment.”

The chargers are being installed by electric vehicle charging firm, InstaVolt. Unlike many other firms, InstaVolt installs and maintains chargers for free and instead makes its money from the sale of electricity to drivers. It even gives site hosts a rental income for letting them use space to house the chargers.

CEO Tim Payne said: “As electric vehicles become more and more popular, it’s a no brainer for businesses to start offering charging points to customers. Both the Government and the private sector are in agreement that we need a reliable public charging network and companies like Bannatyne Group are helping to make that possible by making chargers available for drivers to use on their land.”

Like all of InstaVolt’s charging units, those at Bannatyne Health Clubs will be available for electric vehicle drivers to use on a subscription free, pay-as-you-go basis. Motorists simply tap their contactless credit or debit card, charge-up and go. Users are charged only for the electricity they use on a per-unit basis. There is no connection fee, minimum charge or monthly subscription fee.

The chargers are compatible with any electric car that is geared up for DC rapid charging.

To find out more about InstaVolt visit www.instavolt.co.uk.