AN incredible 86 young people from schools across Thurrock came together to receive prestigious Jack Petchey Foundation Achievement Awards presented at the Civic Hall on March 14th. The audience were treated to various performances throughout the evening including a song from The Voice UK contestant, and fellow Achievement Award winner, Ruti Olajugbagbe.

In addition, seven adults were also celebrated with Leader Awards who have demonstrated, in an outstanding way, an ability to motivate young people. They received a medallion and a framed certificate.

Youth organisations and schools in Thurrock have received funding of £511, 515 from the Jack Petchey Foundation since funding started in 2002.

The Mayor of Thurrock, Cllr Tunde Ojetola said: “What a night! I’m really proud of all the young students and their achievements. I’m sure they will go on to achieve great things. Well done all.”

Winners included Acacia Louise Villios, aged 12, who attends Gable Hall School. Acacia, who was nominated for the award by her classmates, is part of the award-winning cast of Billy Elliott the Musical UK and Ireland tour. She has been performing with the cast since rehearsals began in 2015 and has danced in front of audiences all over the UK and Ireland.

Acacia plays the role of ballet dancer Keely Gibson, who is part of Billy’s secret dance lessons. She has performed in front of thousands of people and will now be travelling overseas with the cast to take the show to Hamburg! Acacia joined the Junior Performers Dance School in Corringham when she was just two years old and her career has continued to blossom since then. 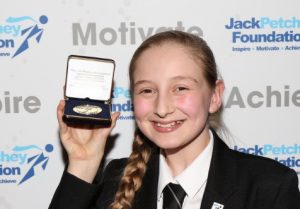 Acacia decided to spend her £250 Jack Petchey Achievement Award grant on booking a professional dancer to come to the school’s dance club.

Sasha Martin, aged 13, attends The Gateway Learning Community. She is a very dedicated Food Technology student with a keen interest in cooking. Sasha recently took part in the National Young Chef Competition, where she came third only three points behind the winner. 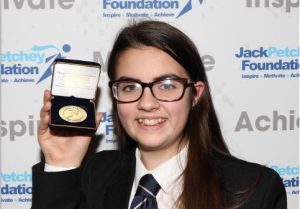 Sasha impressed the judges of the competition, who commented on her high standard of cooking skills and professionalism, especially at such a young age. Aside from being a high flying chef, Sasha is also a School Ambassador. She is a very positive student who helps to make younger students feel encouraged and included on a daily basis.

Sasha decided to spend her £250 Jack Petchey Achievement Award grant on getting new blenders for the academy’s Food Technology Department.

Alfie Smith, aged 14, attends The Harris Academy – Chafford Hundred Campus. After three gruelling trials, Alfie was selected out of 100 boys to play for the Essex County Schools squad this season. Alfie was so impressive he was selected to play over others who had already played in a professional team. He was determined to get through and put in the hard work to get himself there. 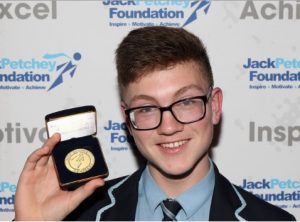 Alfie decided to spend his £250 Jack Petchey Achievement Award grant on basketball equipment for his school.

Abbie Wright, aged 14, attends St Clere’s School. Since starting at St Clere’s, Abbie has proven herself to be a model pupil. She has been a dedicated part of the peer mentoring team, helping students across the school to progress and improve their grades. 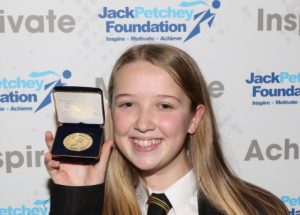 In the past year Abbie has received over 374 rewards in school for various things such as, her outstanding attainment, for helping others throughout the school and her 100% attendance. Abbie received top marks in her annual report from all subject teachers and is a consistently hard-working, dedicated student.

Abbie decided to spend her £250 Jack Petchey Achievement Award grant on books to help GCSE students when revising for exams.

Zainab Hassen, aged 15, attends Grays Convent School. Zainab is a consistently good student who always puts the upmost effort into every one of her classes, which results in her obtaining high academic marks. 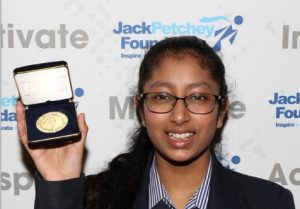 As well as being a high achiever, she is a positive influence to others and somewhat of a role model to the younger students. Zainab was nominated by a classmate who said: “Zainab is a very supportive and loyal friend, I value her friendship.”

Zainab decided to spend her £250 Jack Petchey Achievement Award grant on a trip to Thriftwood Scout Camp Site for her and her classmates to enjoy.

Sir Jack Petchey CBE aged 92, said “I am passionate about our awards scheme which enables young people to be recognised, valued and rewarded for their achievements and positive contributions to society.”