Cricket: Belhus on tour in Barbados 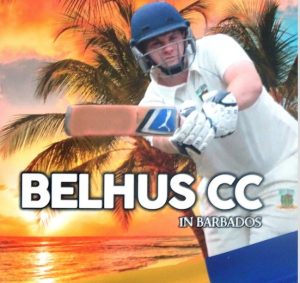 BELHUS have completed their third tour of the Caribbean idyll of Barbados, with seven matches played across the island.

Belhus paceman Connor Day hit the ground running with a wicket in the first over of the tour.  His spell was accurate, hostile and quick as the hard, fast pitches of Barbados was to his liking.  Day finished with 2-26.  John Wilson’s teasing spin bowling earned him a magnificent return of 4-46 and Ryan Wells claimed two wickets.  For the hosts, Auguste struck 83 until he came one of Wilson’s victims, stumped by Wayne Read.   The tourists’ reply started well, through Wells with 30 runs, Zak Wilson contributed 34 and John Lewis made a fine 40.  Others made good starts but Belhus lost regular wickets, not helped by

deteriorating conditions caused by a short rain break.  The slower outfield undoubtedly put the visitors at a disadvantage, but Campbell (4-39) and Broomes (3-44), swept away any chance of an away win.

This proved to be a tough day for the tourists in the Bajan furnace as they were royally second best against superior opposition.  On their picturesque east coast ground, Cavaliers racked up a formidable score through an impressive team performance, with the top five host batsmen reaching at least 30 runs.  Ward led the way with 48, while Green, Murray, Cadogan and Turnhill struck 41, 36, 30 and 34 respectively.   Skipper Martin Guilbert was the pick of the tour bowlers with 1-33 from seven overs which included the only maiden of the innings.  Mark Sansom made three stumpings as John Wilson and Imran Mohammed picked up two wickets each.  Matthew Williams collected one wicket and achieved a run out while Roy Heffernan took a fine diving catch in the deep as Belhus toiled in the oppressive heat.  After another excellent tea, the visitors were soon in trouble losing Mark Sansom and Zak Wilson, both without score.  Williams top scored with 17 and Guilbert contributed ten runs, but they were the only double figure scores as Belhus slipped to 68 all out in just 23.1 overs.  Goodman was the pick of the home attack.  His ripping left arm spin secured four victims for just eight runs from his allotted seven overs.

At the renowned Wanderers club, steeped in tradition, Belhus were invited to field.  On another stiflingly hot afternoon, Evelyn and Cadogan made half centuries for the hosts but the tourists produced a noble effort in the warmth as Ryan Wells (3-19), Roy Heffernan (2-19) and Imran Mohammed (2-25) all bowled with good discipline.  Wells also took two fine catches as the hosts made 245 all out.  After tea, Charlie Lewis (43) and Sam Hall (29) opened the batting in fine style, striking twelve boundaries between them.  John Lewis made a ferocious 38 from just 20 balls with five fours and one six as the tourists tried to keep pace with the required run rate. Trotman (4-33) and Emptidge (3-26) kept Belhus in check and despite a decent performance, it was another home win.

Lodge School was the venue for the fourth match of the tour.  Belhus lost the toss and were asked to bat first, a diversion from their usual Barbados experience.  The reversal paid no dividends, as the visitors slid to a seven-wicket defeat.  New tour arrivals Joe Joyce and Daniel Dreher opened the batting and all seemed well as these two added 25, but the loss of Dreher started the rot and the travellers quickly fell to 37-3.  Charlie Lewis and Ryan Wells added 31 for the fourth wicket moving Belhus to 68-4 but this proved to be the high point.  Wells top scored with 29 but then a capitulation occurred; 106 all out after 28.3 overs.  Cumberbatch with 3-7 was the chief tormentor with the ball.   In reply, the hosts were in no mood to delay, galloping to their target in just 12.1 overs.  The one highlight for Belhus was the probing flight of Cliff Cansdale who captured 3-26 to add a smattering of respectability to a generally disappointing performance against more talented opponents.

A strong middle-order performance from the Winward triumvirate of McCaskie, Young and Calendar proved to be a decisive factor as Belhus registered another loss.  McCaskie and Calendar both fell to Joe Joyce, having shot their way to 50 and 46 respectively.  Young remained undefeated on 82 at tea.  Joyce finished with a creditable 3-48 from seven overs while Connor Day, Matthew Williams and Martin Guilbert picked up one wicket each.  There was a marked improvement in the visiting batting stages as Joyce completed a fine all-round performance with 46 from just 45 deliveries which included three fours and two sixes.  Earlier, 35 runs from John Lewis continued to keep Belhus in the contest, while supporting roles were played by Wayne Read, Charlie Lewis and Martin Guilbert with 13, 19 and ten runs respectively.   For Windward, Green and Wilkinson claimed 2-38 and 3-28 respectively, while fourth change Calendar wrapped up the match in timely fashion by bagging 4-26 from six overs, which included the wicket of Belhus top-scorer Joyce.

Belhus found no change of fortune in this 20/20 match, but Ryan Wells and Zak Wilson got the tourists off to a perfect start as they reached 79 without loss after just nine overs.  A fatal collapse ensued to 137 all out as Alleyn, Rowe, Byas and Edwards ripped through the visiting ranks.  Alleyn picked up the wickets of Wilson, Charlie Lewis, Joe Joyce and Tom Thompson to finish with 4-14 from four overs.  Rowe, Byas and Edwards returned figures of 2-14, 2-26 and 2-7 respectively.  When the Force batted, Wells had Barnum caught by Wilson for just six runs in the first over, but opener Graves, 54 not out, and number three McCaskie, 50 not out, saw the regiment over the finishing line without further loss and with seven overs to spare.

The Barbadian experience for Belhus was rounded off by facing West Indian test bowler Jomel Warrican.  It was another tough afternoon in the cauldron.  Batting first, the tourists were reduced to 61 for the loss of six wickets, but good resistance was provided by Sam Hall with 53 runs, who became the third Belhus batsman to score a half-century on Bajan soil. Hall struck two sixes and eight fours.  Matthew Williams offered support with 24 runs which included five boundaries.  After tea, S. Brathwaite appeared to hit the ball harder – and more frequently – than anyone else on this tour.  And by Bajan standards, that’s quite an achievement.  He blasted 51 in no time, peppering selected real estate in the process.  His early retirement may have seen property insurers breathing a sigh of relief, but inevitably there were other batsmen waiting in the wings to plunder quick runs.  Cumberbatch and J. Brathwaite also retired on 41 and 31 respectively which left only Braydon Scarlett to collect an ‘earned’ wicket, when he had number four batsman Sealy trapped leg before for just six runs.   Sealy, however, is a promising thirteen year old leg spinner who earlier bowled Belhus opener Wayne Read for just two runs with a master delivery which pitched outside leg stump and hit the off peg.  He went on to bag John Lewis and Mark Sansom, to finish with 3-29 from seven overs, which included three maidens.