Potholes: Thousands of miles of UK roads in poor condition 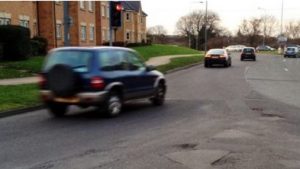 SOME 10% of the road network maintained by local authorities in Great Britain is in poor condition, or has been flagged for further inspection.
Around 37,000 kilometres (22,990 miles) across England, Wales and Scotland fell below top standard in surveys carried out on behalf of the Department for Transport.

The government said it was investing £6bn in improving local roads.

The analysis by the BBC shared data unit comes as a separate investigation by the Asphalt Industry Alliance found more than 39,300 kilometres (24,400 miles) of road had been identified as needing essential maintenance in the next year.

Simon Williams, a spokesman for the RAC, said: “Before the cold snap the condition of many local roads was on a knife edge with many councils struggling to fix our roads properly.

“But now, as a result of the ‘Beast from the East’ some local roads will have deteriorated even further, possibly to the point that they represent a serious risk to the safety of users.”

Over the past eight years, London and the South East were consistently the worst performing regions of the UK.

Thirteen out of 151 local authority areas saw an increase in the proportion of their road network deemed poor from 2009 to 2017.
They were York, Hartlepool, Wigan, West Sussex, Portsmouth, Stoke on Trent, Solihull, Barking and Dagenham, Kingston upon Thames, Bury, Stockport, Herefordshire and Manchester.

Julian Bell, who chairs London Councils’ Transport and Environment Committee, said: “[We] recognise that road quality is an urgent concern and are committed to making improvements to the roads.”

However, he said present funding was not enough to meet the needs of London’s growing population.

3 Responses to "Potholes: Thousands of miles of UK roads in poor condition"