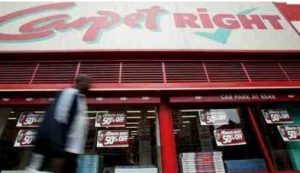 THE gloom on the high street deepened on Wednesday as struggling Carpetright said it would close more stores reports The Guardian.

Carpetright, Britain’s biggest carpets retailer, did not reveal how many outlets might shut, but it is believed to be considering axing up to a quarter of its 409 UK stores. A decision is expected in the next few weeks. It said the closures were needed to address the “legacy property issue” resulting from overexpansion under its previous management.

The company is considering a company voluntary arrangement (CVA), a process designed to stave off insolvency by closing stores and negotiating lower rents with landlords. It has arranged an emergency short-term loan of £12.5m from shareholder Meditor in return for an additional 5% stake and also wants to raise between £40m and £60m through an equity issue.

Carpetright has issued a series of profits warnings in recent months, sending its shares sharply lower. At their current level of 41p, the business is valued at less than £30m.

The potential Carpetright closures come as fashion retailer New Look’s creditors meet on Wednesday afternoon to vote on a CVA that will involve the closure of up to 60 of its 593 stores and rent reductions on dozens more.