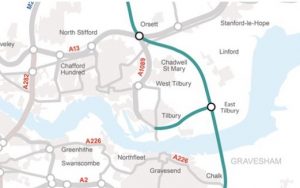 THURROCK Council has set aside £380,000 to find out more about the Lower Thames Crossing plans.

Councillors said they are increasingly concerned about the lack of data being provided by Highways England about the Essex to Kent tunnel link – especially on air pollution, noise and design.

Conservative councillor Mark Coxshall, for Chafford and North Stifford, said the money would be spent on a data bank.

“We want to get some data led information of our own,” he said. “We will use our own data rather than waiting for information from Highways England.”

The Lower Thames Crossing Task Force was due to raise concerns with Highways England officials at a meeting last night.

Top of the agenda is health concerns due to increased vehicles exhaust fumes. Thurrock has the highest rate of lung disease outside of London.

Although Thurrock Council has demanded full environmental impact assessment, Highways England has declined to commit. amid claims that ‘environmental measures do cost money’.

Thurrock Independents councillor Roy Jones, for Stanford East and Corringham Town, said: “I’m not happy with how things are going and I’ve made my position clear to Highways England.

“They are not being transparent with us. We are very concerned about people’s health.

“If Highways England are not going to come thorough with these facts and figures, we will get out own.

“Residents are all angry about. We need to bring Highways England to account. They don’t take notice how bad out pollution is here.”

Labour Councillor Steve Liddiard, for Tilbury St Chads, has been in regular contact with government officials about the impact the scheme will have on locals.

As member of the Lower Thames Crossing Task Force, he said the combination of a new Tilbury power station, 30,000 new homes and new Tilbury port represented a potential threat to people’s health.

He said: “We will be complaining to MPs and regulators. We will complain to everyone, or we will choke to death.”

Highways England rejected claims that it was not providing enough information about the project.

A spokesman said public consultation was ongoing and that far fewer vehicles will be petrol and diesel in 10 years time.

He said: “We understand people’s concerns about environmental, noise and air quality impacts. We will be carrying out detailed assessments of each of these areas and where necessary we will develop solutions to minimise the impacts on local communities.

“Regarding engagement with Thurrock, we are working with councillors and officers to understand and address their concerns.”