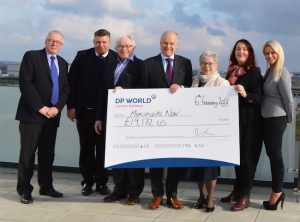 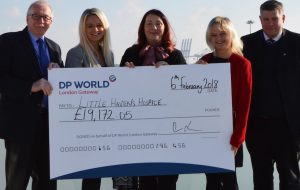 Over 300 people attended the event to raise money for Meningitis Now and Little Havens Hospice, the Port and Logistics Park’s two chosen charities.

Held at Orsett Hall, the quiz was formed of a number of rounds. The first saw participants attempt to construct the tallest structure possible out of marshmallows and spaghetti. Castle Point Motors and Amber Hydraulics created a 75cm tower, which saw them top the rankings and win the first round of the night.

Port Operations Director Andrew Bowen assumed the role of quizmaster for the fifth year in a row. In the rounds that followed, he fired off his cruel quiz questions to a bewildered audience; attendees were tasked with identifying the make and model of certain cars and answer questions such as how many truck service lanes the port has, where in the world you would be going if your luggage label read “SCL” and which Ed Sheeran song spent 13 weeks at number one this year.

Great prizes were won in the raffle, from a 49″ TV, to iPads, wine, watches and more. The silent auction saw highest bidders secure experiences such as a one hour helicopter ride, a trip to Bruges and an opportunity to play golf at world famous courses.

Emma Batten, a mother-of-two boys who utilises the incredible services offered by Little Havens Hospice and Bob Johnson from Meningitis Now gave speeches about the work both charities undertake to help those suffering – touching the audience with tales of their own experiences.

Meningitis Now is working towards a future where no one in the UK loses their life to meningitis and everyone affected gets the support they need. It does this by funding research into vaccines and prevention, raising awareness so people know what to look for and what action to take if they suspect meningitis and rebuilding futures by providing dedicated support to people living with the impact of the disease.

Chris Lewis, Chief Executive Officer, DP World UK, said: “These annual quiz nights have become one of DP World London Gateway’s flagship and most eagerly anticipated events, bringing together customers, suppliers, staff and other key stakeholders for a night of great fun and, most importantly, appreciation for the tireless work these two wonderful charities carry out in both the local and wider community.

“I am proud that the team is able to pull together such an event and raise so much money. With the fantastic support we receive, we’ve now raised more than £200,000 for charity over four years – a superb achievement for a business that is only now in its fifth year.”

Steve Dayman, Founder, Meningitis Now said: “The driving force behind our activities are families and friends who have personally experienced the trauma that meningitis causes. The continued support of DP World and its associates gives us all a welcome boost and helps us to continue to make a significant contribution to the meningitis cause.

“On behalf of everyone associated with Meningitis Now thank you so much, it really is appreciated.”

Tanya King, Business Development Manager, Little Havens Hospice said: “Having a child with a life-limiting illness, or coping with the death of a child is something most of us couldn’t even contemplate. Whether a child is in our care for years, months, weeks or sometimes just hours, it’s about making every day count for them and their families, like Emma’s. Little Havens is a special place but it could not exist without support from the community and businesses like DP World.

“I can’t thank them enough for holding such a successful event. Little Havens must raise £46,000 every week so every penny raised will enable us to continue caring for children and families across Essex when they need us most.”