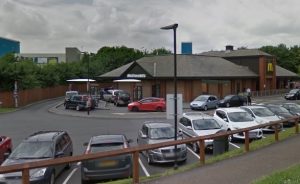 FAST food chain McDonald’s has been fined after a teenage employee was hit by an angry motorist outside its Lakeside Shopping Centre branch in Thurrock.

Road signs for the restaurant’s drive-through and car park entrances were unclear and Danny Osborne had been asked by his shift manager to go outside and direct customers.

A court heard how the driver became ‘aggressive’ and drove into Danny, who was just 17 at the time in 2014. He was left with a fractured knee and was forced to give up boxing and a dream career in construction.

The fast food giant admitted two breaches of health and safety at Basildon Crown Court. Thurrock Council brought the prosecution after its investigation into the incident on 18 April 2014 found McDonald’s had not trained its staff how to direct and control traffic.

Prosecuting lawyer Richard Heller read out a statement from Mr Osborne, which said: “This accident has really stopped me from doing all the things, physically, that I wanted to do growing up. ‘I will have to live with this for the rest of my life.”

The court also heard how two other employees had been injured directing traffic at the branch. Mr Heller, who was representing Thurrock Council, added: “At no stage had the company contemplated that employees may have been at risk.”

McDonald’s in Lakeside was found not to have provided sufficient training; the company was fined £200,000 and ordered to pay £26,343 in costs.

One Response to "McDonald’s fined £200,000 after teenage employee hit by angry motorist"