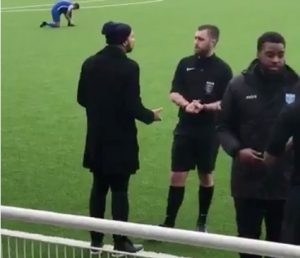 THE match between Grays Athletic and Barking FC was abandoned after a number of altercations on the touchline.

There had already been nine yellow cards, altercations at half-time and then the incidents in the 68th minute which led to the referee deciding to call the game off.

Kieran Bishop had scored in 67th minute to make it 1-0 to Grays Athletic.

A Grays Ath spokesperson said: “The club can confirm that htis afternoon’s fixture between Grays Athletic and Barking FC was abandoned.

“This followed lengthy discussions between the match officials and the Barking bench shortly after Kieron Bishop had opened the scoring.

“Obviously, the referee’s report will outline the reason for the abandonment and the club will make no further comment at this stage”.

Barking manager, Justin Gardener took to Twitter to put his side of the story after allegations that he made highly inapproprate comments towards the Grays manager, Jamie Stuart.

He said: “I would never say what was being said, I am a husband, father of three kids and have family members who have been taken away from me due to illness, so shame on those that have reported lies.

“I also spoke to the Grays manager after the game about our disagreements. We left shaking hands.

As for the game, we will let the FA deal with that. There is plenty of video footage that will show what was said and happended.”