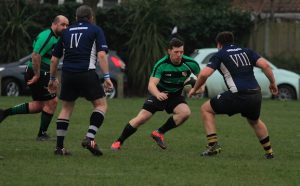 A difficult week for selection with so many players working or injured Thames travelled to Chelmsford with 17 players however their hosts were also struggling for players due to a club day out at the Premiership game between Saracens and Harlequins. Two previous games between the sides had produced two of the best most competitive games of the season so with both sides reduced in numbers the stage was set for another epic battle.

Thames got into the game first with a quick try coming from Kyle Munro. Thames attacked down the left at pace, with good support from both forwards and backs, it was Munro who under pressure manged to muscle his way over the try line. Rhys Dell had no trouble adding the extra two points.

Thames’ try spurred on Chelmsford and the home side struck back almost immediately with a good team try of their own, adding the conversion. Chelmsford seemed to pumped up by their try and it was only a few minutes later that they took the lead with a power run down the right wing and conversion. As Chelmsford scored Thames were dealt their first blow with key player Jack Egar having to leave the field due to injury however ready to prove that he has learnt so much in his first season of senior rugby Jack Price one of the Thames’ young guns came on and showed everyone what he can do.

From the restart Thames pushed on, through Mark O’Connell they got within one metre of the Chelmsford try line and kept battering at the door but Chelmsford held firm but coming off side Chelmsford gave Thames a chance at the posts with a penalty. Dell made easy work of the kick however the move had taken its toll of O’Connell’s hamstring and he limped from the pitch. Thames’ only remaining sub was one of their coaches but when needs must it there was no question, as a team they stand together player or coach.

Thames made a quick reshuffle in their line up and prepared to receive the kick off. For the next few minutes the two sides battered each other with hard attacking running and strong defensive lines. Thames managed to push Chelmsford back towards their try line and again were penalised for coming side. Dell again stepped up and slotted the 3 points.

The first half came to a close with Chelmsford in the lead 14 -13 which showed how tight the game was.

The second half started of badly for Thames with Chelmsford running through Thames defensive too easily and added the conversion. A little stunned Thames was still trying to rally when Chelmsford stuck again, using their experience Chelmsford pulled in the Thames Defence and ran in under the posts making the conversion easy.

Thames had a quick frank chat behind the posts and it seemed to do the trick from the restart they drove into the Chelmsford attack. Again the two sides matched each other in a gruelling battle of attack and defence. With no subs remaining Thames were reduced to 14 players after James Going took a huge blow to his knee and was unable to continue. The Thames backs knew they now had to work even harder and that is exactly what they did. From a Thames Lineout the ball was moved quickly to the backs, Dell hacked on it to space and Max Clarke, Thames’ speedster out sprinted the Chelmsford cover and touched down, Dell added the extra two points.

The game restarted again with both teams playing a mix of expansive and driving rugby, both teams were playing on the gain line giving everything. Chelmsford’s forwards had the slight upper hand in attack showing their experience working off each other so well. As they edged closer to the Thames’ try line Thames defended hard but just as they looked to be stealing the ball they knocked on which gave Chelmsford a scrum. The Chelmsford pack didn’t need beginning asked twice, their pack drove for all their might and Thames just couldn’t contain them as the scrum broke up under the pressure Chelmsford were awarded a penalty try.

Thames hadn’t given up by a long shot despite having only 14 players on the pitch they carried on attacking and pushing hard. With just under 10 minutes to play Thames were dealt another blow when prop Daniel Napper hurt his shoulder bad enough that he had to leave the pitch. Down to 13 players Thames once again adjusted with 7 forwards and 6 backs, with nothing to lose they threw everything they had at Chelmsford but despite their valiant efforts they just couldn’t find the gap. The game drew to a conclusion with Chelmsford taking a well-deserved win 35 -20 however both teams knew they had been in another outstanding game and the respect between the two teams was clear to see.

Thames awarded their man of the match to Conal Maquire, starting at 2nd row he moved to number 8 and then finally to prop, he had but his heart and soul, not to mention his body into the game.

Thames’ first season reformed has been nothing more than amazing. At the start of the season they were still just coming together, players stepping up from youth rugby and coming from different clubs yet they have formed to be a team for the future. There are still lots of rough edges and new tough learning experiences to come up against next season but the future is extremely positive. The team has enjoyed such fantastic support from the club and its members and thank you doesn’t really cover it for the backing at both home and away games.

A huge thank you to Zoe Rawe who has followed the team this season taking the match day photos and of course the coaching staff for their dedication and commitment.

Football: Grays Ath move to edge of play off places

THURROCK Council's Chief Executive, Lyn Carpenter, is currently taking a period of leave from the Council. Ian Wake, Corporate Director of Adults, Housing and Health, will be acting Chief Executive and Head of Paid Service in her absence.

WHEN will they ever learn that if they seek to conceal their actions the public will justifiably assume the worst.

THURROCK Council's Chief Executive, Lyn Carpenter, is currently taking a period of leave from the Council. Ian Wake, Corporate Director of Adults, Housing and Health, will be acting Chief Executive and Head of Paid Service in her absence.

WHEN will they ever learn that if they seek to conceal their actions the public will justifiably assume the worst.