SUNDAY 25th March not only heralded the start of British Summer Time but was also the start of the performance season for Harmonie Concert Band. In preparation for its busy year ahead (including performances in Southend, at the Orsett Show, and on the Eastbourne Bandstand) the band had invited the award-winning composer Nigel Hess to work with them for the day. Many will know his TV themes including Dangerfield, Hetty Wainthropp, Campion and New Tricks as well as his film score to Ladies in Lavender. Although Harmonie is based in Rayleigh in Essex, the band travelled to High House Production Park in Purfleet for its rehearsal day with the composer. 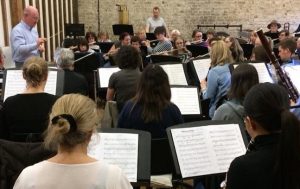 At its rehearsal day Harmonie Concert Band worked on some of his pieces that will be featured in their concert programmes this year and everyone felt honoured to have had the opportunity to work with the composer himself. Band Chairman, David Adlington said “Working with a well-known and award-winning composer such as Nigel Hess is a fantastic opportunity for a community music group like Harmonie Concert Band. Working with the actual composer of some of the music that will feature in our 2018 programme certainly gave us additional insight and helped us raise the bar – and we hope this will shine through in our forthcoming concerts”

The band were in an up-beat mood after the rehearsal with everyone expressing what a fantastic day it had been. In response Nigel Hess complimented the band on being “absolutely terrific” and great fun to work with.

Harmonie Concert Band was formed in 1976 and is a registered charity that allows local musicians the opportunity to improve their musical skills and also helps raise funds for many local charities. For more information about the band please visit the band website www.harmonie.org.uk