The 18-year-old was crowned winner live on television on Saturday night.

Ruti performed Dreams, which will now be her first single.

Ruti has now landed a recording contract with Polydor Records.

Friends and supporters gathered at The Railway Tavern in Stanford to watch the programme. 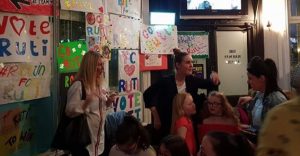