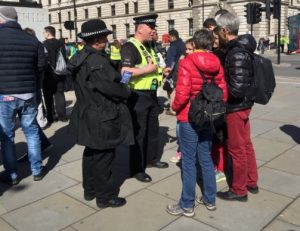 ON A number of occasions, we have reported on the frustrations that residents across the borough have felt about the lack of policing in Thurrock.

A few weeks ago, we reported on the case of a lady in her seventies who struggled to get police officers to attend to males attempting to break in to her house in South Ockendon.

There is also the ongoing problems with Grays High Street that, many believe, is crying out for a uniform presence in the arera.

So, it may come as a disappointment to residents/taxpayers that it appears that police officers that could be deployed in Thurrock are patrolling Trafalgar Square.

According to the tweet by Lord Harris they were there as part of Project Servator.

A few days ago, The Met Police announced that there would be 300 extra officers patrolling in London.

Many critics like to clarify that these officers are not “magicked” up from nowhere but will be officers having rest days cancelled and shifts extended.

Meanwhile, residents from Aveley to Corringham continue to be frustrated with a lack of policing.

How many are now in London is a moot point. More than two?