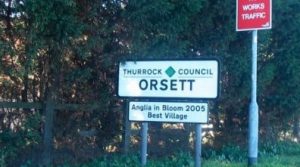 ONE recalls a conversation with a Labour candidate for Orsett a few years ago. They told YT that everyone was very nice and he ate lots of cake but they all ended the conversations politely declining to vote for him.

Orsett has had, for a long time, stalwart councillors who feel very passionately about the areas of Bulphan, Orsett and Horndon-on-the-Hill.

For many years, there was Mike and Diane Revell. For the last few years, there has been Brian and Sue Little. Brian has stood down. Not sure he enjoyed the experience. It is a shame that yet another businessman has just lasted one term as a Thurrock Conservative councillor. In the past there has been Andrew Roast, Charlie Key, Simon Wootton, to name just three, who by all accounts, enjoyed serving the community but couldn’t be doing with all the other nonsense that seems to come with being a Thurrock Tory.

However, it looks former Ockendon councillor, Barry Johnson fancies another go. Barry Johnson was always a key member of the Conservative administrations. He did sterling work as both a ward councillor and as a portfolio holder, especially with finance. If he wins, he will probably return in as a portfolio holder. To be honest what we missed most is Barry shaking his head in disbelief at Labour statements.

Cllr Sue Little remains and she will be able to take Barry on a tour of the large ward that has a lot of challenges with issues such as the new Thames Crossing and the little matter of 32,000 homes on the horizon. Oh and they are closing Orsett Hospital. But Sue Little harnesses the concerns of the residents very well and that good will goes far.

5 Responses to "Ward by Ward: Orsett"