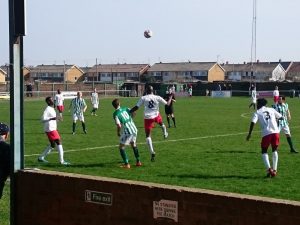 An early George Whitby penalty plus further strikes from Jamie Brown, Jack Adlington and James Peagram helped the Bees to a comfortable win over Tower Hamlets at Aveley’s Parkside ground in an Essex Senior League contest. The game had been switched from Mile End to Oakside originally due to Mile End’s unavailability for football however with the Oakside pitch struggling to be fit for play too the game was then moved to the 3G surface of Aveley’s excellent Parkside facility. And it was the visitors who broke the deadlock after ten minutes when after Oli Spooner was tripped inside the area, George Whitby stepped up to emphatically convert the spot kick and send Basildon on their way. Seven minutes later it was almost a second for the Bees when a flick on released Matt Brinklow in on goal, but keeper James Pellin managed to make a decent save to keep the ball out of the net, and in the 26th minute Hamlets forward Luke With almost got on the end of a ball forward but Bees keeper Connor Wheatley just about gathered. The Bees were then dealt a blow when Tommy Barton landed awkwardly on his arm and shoulder after going into an aerial challenge with With, and it saw the Bees midfielder leave the game clutching his arm, lets hope for his and Basildon’s sake it isn’t too serious. The Bees then missed a sitter seven minutes before half time when a ball headed back across goal was somehow headed over by Adlington from barely a yard out, but four minutes later the visitors did double their lead in style when Brown curled a beauty beyond Pellin into the top corner, and the Bees went into the break two goals to the good. The first chance of the second period fell to the Bees, and saw substitute Peagram drag wide after getting into a good position inside the area, however midway through the half it was three for the Bees as after a terrible ball out of defence went straight to Adlington, the Basildon attacker sent a brilliant effort beyond Pellin and into the net. And just three minutes after that Basildon made it four when Peagram drove an effort across Pellin and into the far corner, and the game was now running away from the hosts quickly.  Pellin then had to make a decent stop to keep the Bees out, the Hamlets keeper had been carrying an injury from early on in the game so was doing remarkably well considering. Hamlets themselves were trying to find at least a consolation goal in this one and saw half hearted appeals for a penalty turned down after Danny Jones had gone down inside the box, and then the hosts fired a decent effort just wide a minute or so later. The Bees quickly went down the other end and saw an Adlington effort brilliantly tipped wide by Pellin, before the Hamlets keeper made another good stop to thwart the visitors again before the eventual follow up effort went over the bar.  Spooner then got in but struck an effort straight at Pellin however this mattered not as The Bees ran out comfortable winners. It all means that Basildon United now sit 4th, six points behind second-placed Redbridge, but with two games in hand.  For Hamlets it’s a sixth straight defeat now as their season seems to be ending with a whimper as they remain 11th in the table.

Burnham Ramblers 2 Hullbridge Sports 4
Hullbridge Sports came from two goals down to grab an important win against local rivals Burnham Ramblers at Leslie Field and put their opponents in real danger of the drop as a result. Alex Salmon nodded the hosts ahead in the eighth minute and things looked rosy for the home side ten minutes later when Karl Swanborough headed home to double Burham’s lead. But with nine minutes of the first half remaining Hullbridge began their comeback when Jimmy Cox smashed home, and then twenty minutes into the second period Cox placed the ball home to level things up. With twenty minutes remaining Sotoyinbo converted a Michael Salako cross to put the visitors ahead, and then with ten minutes left they sealed the points when Matt Rose crossed for Salako to finish and send Hullbridge seven points clear of the bottom four. As for Ramblers they remain in the bottom four, three points from safety.

Clapton 1 Sporting Bengal United 2
Sporting Bengal all but confirmed their safety after coming from behind to grab all three points against Clapton at the Old Spotted Dog. Jeffrey Cobblah had given the hosts a half time lead but David Vaughan levelled for the visitors before Eaia Embalo netted the winner meaning Sporting are now nine points above the bottom four. The Tons as remain 6th

Redbridge 1 Enfield 1893 1
The Motormen slipped up at home for the second successive game as they were held by in-form Enfield at Oakside. Aundre Spencer gave the visitors a 34th minute lead, firing across Hocking-Rising into the goal after a corner had come out to him, however Redbridge saw Phillip Brown Bampfoe level on the hour mark;  however the point sees the Motormen trail Great Wakering by five points now,  with FC Romania and Basildon United now breathing down their necks.

Sawbridgeworth Town 0 FC Romania 2
FC Romania are now just three points behind second-placed Redbridge after they grabbed a decent victory at Crofters against Sawbridgeworth Town. Second half goals from Gabriel Ghinea and Mihai Botosan ensured victory and keeps their promotion charge on course. The hosts stay 8th following this defeat.

Stansted 2 West Essex 2
Hosts Stansted twice surrendered the lead meaning they had to settle for just a point after their encounter with West Essex at Hargrave Park. After a goalless opening forty five minutes the deadlock was broken three minutes into the second period when Sam West  headed home a corner, however the visitors responded with a header from Tom Macleod in the 65th minute. Ryan Ramsay though restored The Airportmen’s lead from the penalty spot, only to see a sublime chip from Michael Mignot with ten minutes to go to level it up again. Stansted remain fourth bottom, two points from safety, whilst West Essex stay 7th.

Waltham Forest 2 Southend Manor 2
Manor netted late on to deny Forest a vital victory as the two sides played out a draw at Kitchener Road. A free header for Lee Delf saw Manor lead early on however the hosts levelled through a Shomari Barnwell penalty after Douglas had been fouled inside the box. Manor the struck the woodwork before Forest grabbed the lead when Tony DaSilva nipped in to score, however Tyler Fowles capitalised on a poor goal kick in the 90th minute to salvage a draw for Manor. It means Forest stay two points above the bottom four whilst Manor are eight clear now and almost safe.

Woodford Town (2017) 1 Takeley 4 (at Station Road, Takeley FC)
Takeley used the home advantage to net an away win against Woodford Town to keep their slim hopes of promotion alive. The game had been switched from Goffs Lane due to landlords FC Broxbourne Borough also playing at home and Takeley took advantage as goals from George Wappett, Matt Gill, Mitchell Das and Olakunmi Bossanya saw Takeley into a four goal lead. Jack Grosvenor did net a consolation for Woodford and they remain 12th.