A MAN whose use of an imitation firearm caused youths to flee in terror has been jailed for over 10 years. 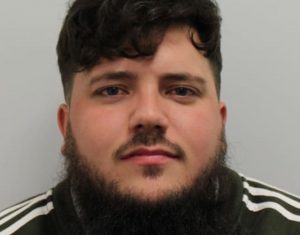 He had pleaded guilty at the same court on Tuesday, 10 April, to possession of an imitation firearm with intent to cause fear or violence.

Suddenly a car pulled up and the back doors opened and CCTV recorded two handguns being brandished at the youths. Understandably, the young men can then be seen to run away in terror.

As the car drove off, it stopped for moments and the guns were brandished again, and then the car made off.

A member of the public had seen the incident and alerted police.

An immediate investigation was begun by detectives from the Trident and Area Crime Command.

Brown was identified as being the driver of the car seen in the CCTV.

He was arrested at his home address on Sunday, 2 September 2017 and charged the next day and kept in custody.

Detective Rob Jones of Trident, said: “Although nobody was injured, brandishing a pistol at people causing them to fear they will be shot is a despicable act. This offence took place opposite a children’s playground on a warm summers evening. Those who were threatened can be seen on CCTV running for their lives. Incidents like this cause fear in communities and are traumatic for all those who witness it.

“Detectives at Trident were determined to find who was responsible and Brown was quickly arrested. Thanks to the evidence gathered he had no option but to plead guilty. Possession of firearms, be they imitation or not, will not be taken lightly and punished accordingly by the courts.”

Brown was also sentenced for an unrelated matter of fraud by mis-representation where two elderly women at cash points were distracted by Brown and a co-defendant, who then took the cards when the women went into the bank thinking they had been taken by the cash machine; £1,400 in cash was withdrawn. He was sentenced to three months for each offence to run concurrently.