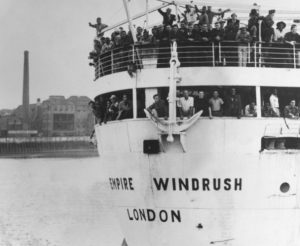 THE government must do “a better job” in dealing with the Windrush generation facing deportation from the UK, Penny Mordaunt has said.

The international development secretary told the BBC there is “no question of their right to remain” in the UK.

Many long-term immigrants who arrived from the Commonwealth as children have been told they are here illegally.

More than 100 MPs from across the parties have signed a letter to Theresa May asking for urgent action.

Guy Hewitt, Barbados high commissioner, said a meeting request from Caribbean leaders to discuss the issue with the prime minister this week was rejected by the government.

The Home Office said delegates at this week’s Commonwealth heads of government meeting in London will be able to speak to Mrs May about the situation.
Meanwhile, a petition on the government’s website calling on the Home Office to grant them an amnesty has attracted the 100,000 signatures required to be considered for a debate in Parliament.

Thousands of people arrived in the UK as children in the first wave of Commonwealth immigration 70 years ago.

They are known as the Windrush generation – a reference to the ship, the Empire Windrush, which brought workers from the West Indies to Britain in 1948.

Under the 1971 Immigration Act, all Commonwealth citizens already living in the UK were given indefinite leave to remain – but the right to free movement between Commonwealth nations was ended from that date onwards.

However, the Home Office did not keep a record of those granted leave to remain or issue any paperwork confirming it, meaning it is difficult for the individuals to now prove they are in the UK legally.

Ms Mordaunt said she wanted to reassure those affected after claims that some were facing deportation and being denied access to healthcare over UK paperwork issues.

She told BBC Radio 4’s Today programme: “People who are in that situation, there is absolutely no question of their right to remain, and their right to gain access to services such as healthcare.

“What clearly needs to happen is we need to do a better job with the process that these individuals are having to go through.”

A letter to the prime minister, co-ordinated by Labour’s David Lammy, called for a “swift resolution of this growing crisis”.

It said: “We urge you to guarantee the status of all Commonwealth nationals whose right to remain is protected by law and to provide an effective, humane route to the clarification of their status.”

It was signed by 140 MPs including Labour leader Jeremy Corbyn and Conservative MP Sarah Wollaston.

“This is the first time I have felt that the country of my birth is saying to people of my region ‘you are no longer welcome’.”

The Migration Observatory at Oxford University estimates there are 500,000 people resident in the UK who were born in a Commonwealth country and arrived before 1971.
People born in Jamaica and other Caribbean countries are thought to be more affected than those from other Commonwealth nations, as they were more likely to arrive on their parent’s passports without their own ID documents.

Many have never applied for a passport in their own name or had their immigration status formalised, as they regarded themselves as British.