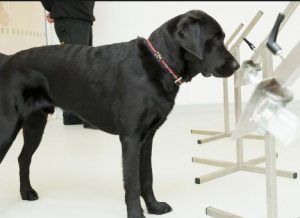 Teams accompanied by specially trained dog teams from BWI Canine visited 16 shops in Grays, Little Thurrock and Tilbury last week as part of a crackdown on tobacconists suspected of selling illegal cigarettes. Searches by the dogs found illicit tobacco, sometimes hidden away in secret compartments in ceilings and walls.

A spokesperson for Thurrock Council said: “The sale of both counterfeit and non-duty paid tobacco generate significant income for organised criminal gangs and helps to fund other criminal activities.

“As well as filling the coffers of criminal gangs counterfeit cigarettes can be extremely dangerous; there are no guarantees about the quality of tobacco or even what is in them. In the past test tests have shown that rat poison and faeces were both found in counterfeit tobacco.

“We will continue to work to eradicate the sale of counterfeit and illegally smuggled tobacco from the shops of Thurrock.”

Members of the public are encouraged to report the sale of illicit tobacco to Trading Standards by calling 03454 040 506.