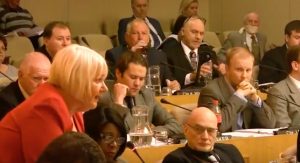 IF you want to see a tenacious campaigner in action, then follow Labour’s Barbara Rice on the doorsteps. The Rice electoral machine is a sight to behold. From Heath Road to Stour Road, Barbara and her husband and fellow councillor, Gerard, work the ward like a well oiled machine.

UKIP have morphed into the Thurrock Independents and they in turn lack the manpower and resources to throw enough at seats such as this one. The Conservatives find it difficult to get more than 300 votes in a local election.

Thurrock Council would a poorer place for Barbara Rice who brings a wealth of experience from her years as a nurse plus her commitment to local politics. It looked at one time that she had lost her mojo as she appeared to despair of what was described as bitter invective from Thurrock Conservatives.

This ward is at the heart of so many Thurrock issues. The Lower Thames Crossing, Orsett Hospital to name just a few.

It will be interesting to see how well (or not) Labour do here.