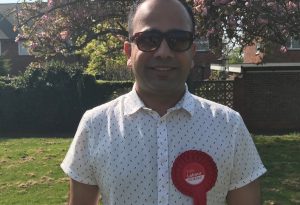 FOUR years ago, the late Andy Smith successfully defended this ward. When he died, many a story was told about Andy’s canny and dogged campaigning strategies. We certainly know cllr Oliver Gerrish learned much. In the Labour candidate for 2018, Qaisar Abbas, it is clear that they have a candidate who has inherited that energetic zeal for campaigning.

He will need it, it is one of the longest wards anyone has ever seen. it is also a fast changing one. Just ask anyone who drives (or is stuck in a jam) on London Road. It is a ward full of potential as new houses and schools and health hubs are planned but it alos has communities that will still feel isolated and unloved. The Garrison Estate is a prime example.

It will be interesting to see how the other three candidates do. Whether the Tories can make any traction with new communities, whether the Thurrock Independent’s Michael Wager can develop any form of base as they morph from their purple period.

There is also Chris Boosey, another ex-ukipper who is representing the newly formed Democrats and Veterans Party.

But if Labour win as predicted, Qaisar Abbas will no doubt bring a zeal, passion and commitment to the ward and Thurrock politics that will be most welcome.